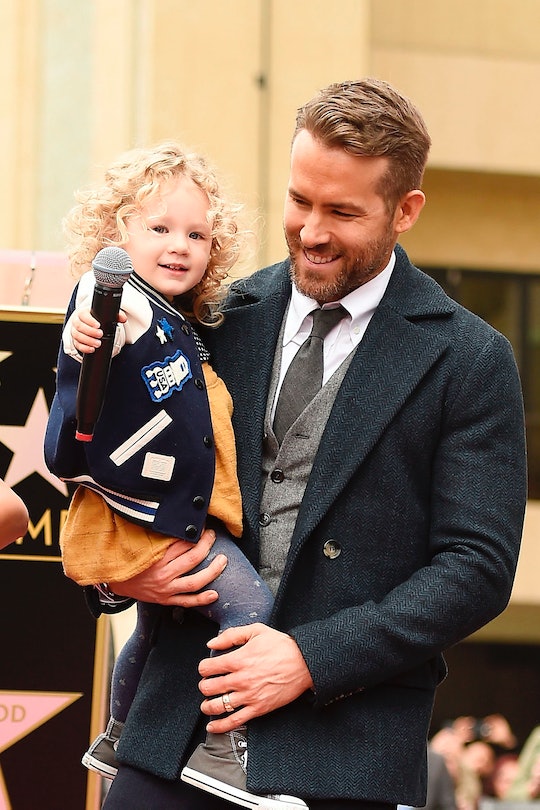 Why We Should Stop Treating Celebrities' Kids Like Accessories

I will admit I sort of loved seeing little James Reynolds, the tow-headed daughter of gloriously beautiful Ryan Reynolds and Blake Lively, for the first time. But I was excited like this, "Oh cool, she's really cute. I like her shoes. I wonder if I still have my shoes like that." I didn't think to myself, "Oh finally! It's about time they shared their children with us!" Because nobody owes it to anybody to share their kids, and we particularly need to stop acting as though we can treat celebrities' kids like accessories.

Ryan Reynolds and Blake Lively have been generally irritating everyone by expecting far too much privacy for their family. They haven't been forthcoming with pictures of their daughters (James is 2 years old and baby Ines is just 2 months old) and have been adamant about keeping the girls out of the spotlight. As Lively once said in an interview with Marie Claire:

My family: That's the thing that I feel most protective of and the thing that I feel is the most exposed when I feel exploited. I'd rather not have to deal with it at all, but we knew the lifestyle we were getting into, and while it's hard… it's another thing when it's our child. She didn't have the opportunity to make a decision about what she wants.

When Reynolds was honored with a star on the Hollywood Walk Of Fame on Dec. 15, he wanted to share the experience with his daughters. He's a dad, and he had a moment when he was proud of his work, and he wanted to look back and remember that his children were by his side. He told Us Weekly:

This is one of the rare occasions when we thought we got to bring the whole clan. I’d regret it in 20 years if I didn’t.

Except Reynolds' moment of pride was turned into a spectacle. His daughters had their "debut," complete with outfit descriptions and a play by play of their behavior (James was hamming it up, baby Ines was mostly sleeping). The internet exploded with grateful images of a family who they don't know, weighing in on the revelation of the baby's name as though their opinion should carry weight. Because our world tells itself that celebrities "owe" us on some level. That their fame and celebrity come at a price; that they don't get to enjoy the fruits of their labor without paying us their privacy. The sad thing is, most celebrities seem to accept the loss of their own privacy... but when they want to keep their children private we're like, "Nope. We want them too."

The idea that we are "owed" access to the children of celebrities is ridiculous. There are loads of well-paid jobs on this planet, doctors and lawyers and the like, and we don't expect access to their children. We don't insist on knowing their names, their birth weight, who they're wearing. We don't ask them to sit down for interviews to share amusing anecdotes about their children that we can pull apart on the internet after the fact.

Celebrities owe us nothing — and their children owe us even less.