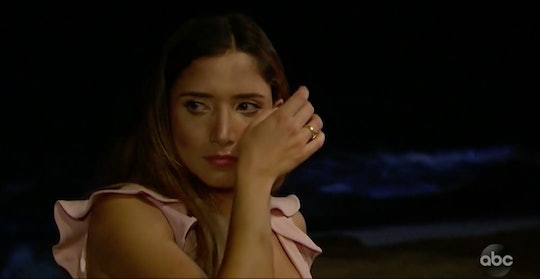 Jordan & Christian Got Kicked Off The Beach On 'Bachelor In Paradise'

After enduring a weeks-long production shutdown two seasons ago, Bachelor in Paradise Season 6 had another scary moment on the beach during the Week 3 cocktail party, when two cast members broke out into a physical fight. Jordan and Christian were ultimately sent home from BiP by production, which stood by its zero tolerance policy for physical violence.

Thankfully, both of them left willingly and without putting up (any more of) a fight. But what exactly happened between them and how did things escalate so quickly? For starters, Nicole, who found herself stuck in the middle, wasn't even in a love triangle with Jordan and Christian. Rather, she'd made connections with both Christian and Clay, seemingly preferring Christian's aggressive flirting style. Clay's a bit more passive, and Nicole basically begged him to be more assertive in some of their one-on-one time together.

But when it came time for him to steal Nicole away from Christian during the cocktail party, Clay ultimately backed down from fighting too aggressively for Nicole. At first, that seemed like the final nail in Clay and Nicole's coffin. But Jordan decided he was happy to step up and defend his buddy's honor. (It doesn't hurt that Jordan and Christian had some longstanding beef, either.)

So Jordan marched over to Christian's romantic mini-date set up for Nicole and ripped down the piñata he'd hung. (Incidentally, Jordan had also been on a date with Nicole, but they seemed to mutually decide their interests lay elsewhere.) Christian got upset with Jordan's antics, though it was probably just a harmless attempt on Jordan's part to parody the moment last year when he threw a teddy bear into the sea. In any case, Christian got up to stop Jordan, there was a scuffle between them, and Jordan wound up body-slamming Christian into the sand.

It's difficult to tell from the footage shown who exactly started the fight; to be honest, it mostly seemed like each of them lost their balance grabbing for the piñata and ended up in an accidental shoving match. But after they wrestled each other to the ground, production quickly swooped in to break up the fight. Jordan walked away, but Christian broke free of his handlers and tore down the beach after him. It took about five people to tackle him back down to the ground and calm him down.

The most heartbreaking part of the whole night was how responsible Nicole wound up feeling for the fight. She instantly felt guilty for encouraging guys to fight for her — which she obviously didn't mean literally, but bros will be dudes. And needless to say, the first person whose arms she wanted to collapse into after the brawl was Clay's. She admitted that the incident made her realize how much she wanted him all along and, ever the gentleman, Clay was there for her when she was ready for him.

You can keep following along to see if this pairing sticks when Bachelor in Paradise airs Monday and Tuesday nights at 8 p.m. on ABC.