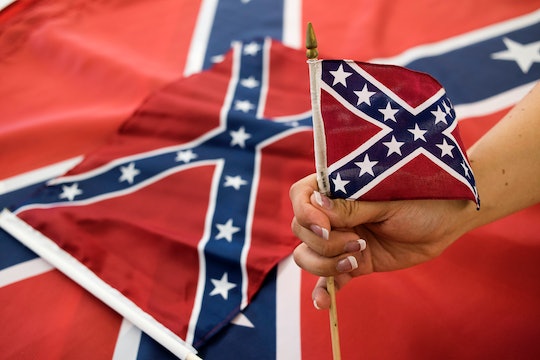 It was a brief but intense display that never should have happened in 2017 — or ever. A glut of protesters descended on Lee Park in Charlottesville, Virginia, around 9 p.m. Saturday night, some of them wielding torches and chanting seemingly pro-Confederacy epithets like "Blood and soil," and "You will not replace us." But aside from the show of intimidation and apparent assertion of white supremacy, the reason there were protesters with torches in Virginia was specific, too: The several dozen who showed up sought to defend a statue of Civil War-era Confederate general Robert E. Lee, which is slated for removal from its current position as a memorial of slavery and oppression.

Even Richard Spencer, perhaps the most high-profile white supremacist of the age of President Donald Trump who also was famously punched in the face on Inauguration Day, was there for a so-called "celebration of our heritage," as local station NBC 29 reported. But counter-protesters soon joined the fray, resulting in a "scuffle" and law enforcement officials quickly dispersing the crowd.

But the fact that police ultimately shut down the demonstration doesn't make the message of those defending the Robert E. Lee statue — and everything it stands for — any less harrowing.

The statue is just one of a slew of such memorials to the Confederacy that activists are fighting to bring down — and succeeding in doing so. In New Orleans last week, for example, authorities removed a statue of onetime Confederate President Jefferson Davis to the widespread consternation of those who believe that this dark part of American history deserves to be respected, instead of relegated to a shameful lesson of what never to repeat. If all goes according to plan, three other monuments in the city will soon be removed as well.

In Charlottesville, southern heritage groups and other conservative figures and entities are outraged over the city council's recent vote to sell the Lee statue, The Daily Progress newspaper reported. Although a judge has issued an injunction that will halt the city's plan for six months, it's free to rename Lee Park as well as carry out a plan to build a memorial to those who were slaves in Charlottesville in nearby Jackson Park, which may also be renamed. A lawsuit filed by local residents and the Virginia Division Sons of Confederate Veterans disputes the removal of the memorial.

It's downright disturbing to see such a blatant declaration of hate, reminiscent of the terror the Ku Klux Klan terrorist group imposed on African Americans in the south unabashedly not long ago. Still, one encouraging sign to emerge is the reaction of Charlottesville Mayor Mike Singer, who swiftly issued a statement condemning the actions of the protesters and reinforcing what should be the given fact that the city must remain safe and welcoming for all:

This event involving torches at night in Lee Park is either profoundly ignorant or was designed to instill fear in our minority populations in a way that hearkens back to the days of the KKK. Either way, as mayor of this city, I want everyone to know this: we reject this intimidation. We are a welcoming city, but such intolerance is not welcome here.

All Americans should join Singer in expressing this sentiment rejecting hatred and intimidation. White supremacy has no place in our cities, our countries, or among the symbols we revere.