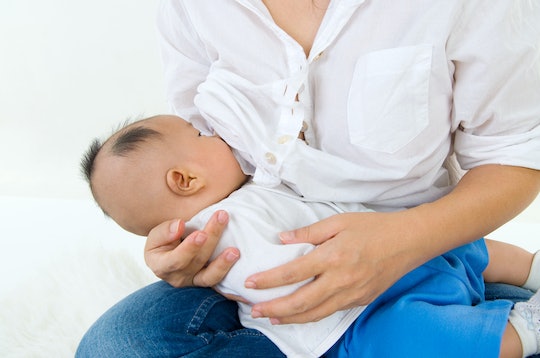 Why You May Have Painful Let-Down

Breastfeeding isn't exactly the most comfortable thing in the world, especially if you're experiencing some pain with your let-down. That tingly, pins and needles sensation is pretty typical, but there's a reason why you may have painful let-down and it's worth figuring out, especially if it's making you uninterested in breastfeeding.

La Leche League International noted that there could be a few different causes of pain when your milk lets down, but in general, all of them have one thing in common — blocked milk ducts. An oversupply of milk, engorgement, thrush, mastitis, and even wearing too tight of a bra can cause you to experience pain when your milk lets down, but all of them can be related to a blocked milk duct as well.

According to Baby Center, when your breast milk lets down, your milk ducts are constricting, forcing the milk from the glands into your nipple so that your baby can nurse. Sometimes this happens while your baby is already eating, but it can also happen randomly throughout the day or when you hear your baby crying. Some women never feel their let down, some describe it as a tingly sensation (like the feeling in your foot after it's "fallen asleep" or gone numb), and others experience pain when it happens. When you consider that the actual act of your milk letting down requires your milk ducts to constrict, it makes sense that a blocked milk duct could cause pain as it tries to constrict, too.

Some moments of breastfeeding may be painful, but you should always try to figure out why something is hurting. Just like fixing a painful latch is important, taking care of a blocked milk duct is also imperative. Not only will it relieve you of some pain, but it can also prevent you from getting an infection like mastitis.

Other than a blocked milk duct, La Leche League International also noted that women with very large breasts may experience pain during their let-down and if you've had a muscle strain or injury, that could be the culprit as well. And, like most pregnancy and baby-related pains, sometimes your breast milk let-down just hurts for no reason at all, especially as your body is getting used to breastfeeding. Try some of the breathing techniques you learned in labor to ease yourself through those twinges, but if you think you have a blocked milk duct and need help in fixing the problem, reach out to a lactation consultant for answers.