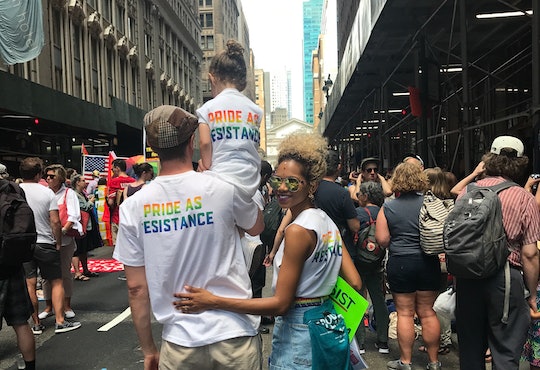 You Need To Vote Like A Mother This Tuesday

When my son was born, the strongest emotion I felt was worry. I worried about his health, his eating, his sleep and his growth. But most of all, I worried about the type of life I would be able to provide for him. I wanted him to have a strong sense of self and be proud of who he is. I felt a burning desire to protect him. I wanted to protect him from the harshness of the world, from injustice and from racism. After the 2016 election, I was crushed with the feeling that my job would be much harder. I knew that it would be harder to raise a kid with an administration that did not safeguard his life as a child of color or protect the rights of his immigrant mother. Elections have always been a time to exercise our right to define the type of country we want to live in. But when I became a parent, elections took on a new meaning. The added responsibility of looking out for the rights of our kids should drive every parent to the polls on November 6 — this year it’s critical. On Tuesday, we need to vote for our kids.

Our kids already have value systems. They know right from wrong. My son, at age 3, is obviously too young to vote, but he can tell me what is fair and unfair. Kids can distinguish between what hurts them and what empowers them and makes them feel good. My son tells me when I hurt his feelings. He tells me when his friends at school are being nice to him. He tells me about that kid who keeps pushing everyone, the one the teacher has to always instruct to be mindful of his body. He tells me when it’s his chance to get a turn dressing up in the fireman hat at school and how great that makes him feel. Kids don’t have the power to vote, so we as parents have to keep their values in mind when we are voting.

As parents, voting also allows us to set an example for our kids. They mimic us, and it’s up to us to teach them that voting is just what you do. When people ask me about being a mother and an activist, I talk about the need to engage kids in our democracy, no matter their age. Here are a few ways to do that.

Help make decisions about which political candidates to support with your kids. Raise them to know that civic engagement is just what one does as a member of a country. Take them to meet local candidates. Ensure that you explain the candidate’s platform in a way that is applicable to your child’s age. Take them phone-banking, if they’re old enough to take part. Canvassing can be fun with a few friends. Make it an exciting activity.

Make a voting plan with your kids. Include them in the actual process of voting. Discuss with them when is most convenient to vote as a family. My husband, Adam, and I always vote before work so we can take our son. Maybe it’s easier for you after school. Most people don’t get the day off to vote and this sets up a difficult situation of having to fit it into an already packed day. Resist the urge to let it slide. Prioritize voting and ensure that your kids know that the day isn’t complete until you vote. Be sure to include your child in these decisions for every election, reminding them each time about the importance of voting.

Civic engagement also means being a part of your community. Once you have a voting plan, ask your family and friends if they have voting plans. Make sure they create one before November 6. See if there is a way to create a support system for those who may need some extra help. Get together with some of the other parents at your kids’ school and make a plan to head to the polls together with the kids after school, if that helps. Whatever you do, plan ahead and find a way to support others in ensuring that everyone gets to the polls. Our kids will take the example of civic engagement and community with them for their lifetime. Women’s March’s campaign, Call Your Sister, connects you with local community phone banking events to call other women and encourage them to vote. This is a great activity to take your teens to. And don’t worry. Women’s March provides lots of guidance so you have all the information you need.

By voting people into power who protect our families and our communities, we provide role models for our children that they can look up to with pride.

Voting also is a way to define the type of political role models we want our kids to look up to. You may not agree with every decision of the person who gets your vote, but vote for leaders with the moral clarity you want your kids to look up to. Whether we like it or not, our kids are aware of what is going on around them. It’s up to us as parents to provide them with role models that exemplify the type of country we want for us and our kids, the type of leaders that are good role models for our children. It’s disappointing to me that my son is living through a period in time when the person leading our country does not set an example for fairness, justice and moral clarity.

I don’t know how to explain to my son that the people in power in this country have allowed children to be kidnapped from their parents while trying to seek a better life, but I know I have to. I don’t know how to justify the lack of protection for immigrants and other marginalized communities, but I know I can’t protect my son from it forever. As the parent of a half-Black, Jewish child, I was at a loss to discuss how our administration addressed the Unite the Right rally in Charlottesville, Virginia, attended by Ku Klux Klan members and Nazis alike; when the people attacking Black and Jewish people were seen as “fine people” by the person in the Oval Office. After the tragic shootings at the Tree of Life Synagogue in Pittsburgh, Pennsylvania, and the shooting in Kentucky where two black grandparents were killed, I didn’t know how to let my son know that gun regulations that could have saved the lives of those people were not implemented by our lawmakers. But as a member of both the Black and Jewish communities, these are conversations I need to have with my son. By voting people into power who protect our families and our communities, we provide role models for our children that they can look up to with pride. We can show them examples of leaders who lead with love and compassion, attributes I want my son to develop.

This election season, vote for yourselves and vote for your children. There is no shortage of inspiring change-makers running for office. If you haven’t done so already, find time to research candidates and also find out which proposals are on the ballot. Educate yourself on the issues that will be affecting your life, the lives of your children and the lives of those in your community. This November, we have the power to make change and to define for our children what type of country they deserve to live in. As parents, we need to stand for ourselves and we need to stand for our children. Until they’re able to exercise this civic duty, it’s up to us to make them proud at the polls.

More Like This
Festive Mommy & Me Holiday Nail Ideas To Try
101 Advent Calendar Activities, From Books To Read To Cookies To Bake
Moms, Just Eat The Fruit Dammit
Real Parents Share What Time They Let Their Kids Rip Into Gifts On Christmas Morning