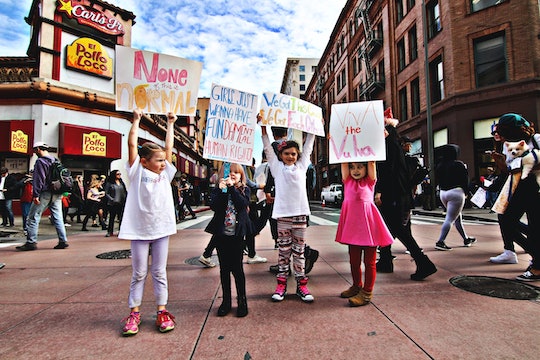 5 Reasons To Talk To Girls About White Feminism

The issue of "white feminism" has been gaining a lot of media attention. You may not be aware that it's a pejorative term that describes the kind of feminism that blatantly excludes the oppression of women who are not white, cisgender, able-bodied, or straight. Many women, myself included, learned about feminism through the eyes of white suffragettes and upper-class feminist leaders. But, today, almost 40 percent of America's female population are women of color, and there are women of all races who identify as LGBTQ+. If there was ever a question as to why you should talk to your daughter about white feminism ASAP, the wonderful diversity within this country is only one of the many reasons.

My daughter is culturally Hispanic, but often passes as Caucasian. She is a second-generation American, with parents both born and educated in the U.S. Her skin is fair, and her last name doesn't give away any ethnicity. She lives in a middle-class suburb, attends a good school, and is free of physical or mental disability. Because she has the privilege of not being personally affected by many of the issues other women of color face, she can easily fall into the trap of white feminism. It's my job as a parent not to let that happen.

Here are some reasons all women should talk to their daughters about white feminism.

More Like This
Priyanka Chopra Posed On The Cover Of 'Vogue' With 1-Year-Old Daughter Malti
Alex Guaranschelli Is A Renowned Chef, But Her Daughter Still Gets Recipe Inspo From TikTok
Lisa Marie Presley’s Daughter Posted A Beautiful Throwback Photo With Her Late Mom
The President Of Ireland Wants To Get Rid Of Homework & Honestly, He's Onto Something
What Parents Are Talking About — Delivered Straight To Your Inbox