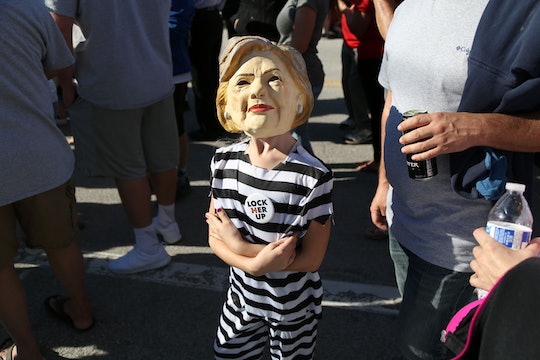 Why You Shouldn't Dress Your Kid In A Political Halloween Costume

It's that time of year again, when parents begin to scramble for Halloween costumes for their kids as the days tick ever closer to All Hallows Eve. Thanks to television and movies, there is a virtual pantheon of kids' characters and superheroes from which to choose. Of course, there are also the safe "everyday" costumes like firefighters and doctors. But there is definitely one area from which parents should stay away — and I'm not just talking about culturally insensitive or appropriative costumes, either. Here's why you shouldn't dress your kid in a political Halloween costume.

I know it's tempting to slap a blonde wig on your kid's head, and, depending on your political inclinations, add a set of pearls and a pantsuit or an oversized suit jacket and a tie. But as tempting as it might be to dress your kids up as President Donald Trump or even former Secretary of State Hillary Clinton, take my advice and opt for something a little less inflammatory on the ol' Halloween candy trail this year. Just as geisha girls, mariachis, and Indian chief costumes are in particularly poor (and racially-appropriating) taste, so too are political costumes when it comes to dressing up your kid for Halloween — and here's why.

Kids Have No Context

Ah yes, the classic "Hillary's Email Server" costume — just perfect for kids of all ages! While I applaud the technical capabilities of this costume, the intent is pretty crass. Even though kids can have plenty of opinions about political leaders, most times, they're just parroting what they hear from their parents or on the news. Yes, political costumes can be "clever," but it's not clever when a 4-year-old is dressed as "Hillary for Prison" — and there were a lot of them last year — because they have no context whatsoever for their costume.

Just as kids might not have a solid grasp on what their costume is trying to mock or impersonate, it's also pretty manipulative for parents to use their kids as instruments of their own personal political beliefs. It's one thing to bring your kid to a rally or a protest — but it's something else entirely to use your kids to make a political statement.

It's Not Exactly Neighborly

There are so many things wrong with this costume: First, that thing is a beast to walk around with on Halloween. But logistics aside, it's just not funny. I get what Ellen DeGeneres was going for last year, but the truth is, this "Trump Border Wall" costume falls flat — on so many levels. Again, while it might seem funny to use your kid to make a joke, the truth is that hot-button political issues do not make for very friendly kids' costumes.

To a family with undocumented immigrants, Trump's wall is just another reminder of how precarious their own living situation might be — and a costume like this is just another reminder that even their neighborhood may not be the welcoming, safe place they thought it was. Think of it this way: Would you dress your kid up as a klansman for Halloween — and if you did, how do you think that would be received in your neighborhood?

It Could Have Repercussions For Your Child

In the run up to Election Day last year, plenty of people thought Halloween would be the perfect time to espouse their political views through controversial political costumes — and it nearly cost several individuals their jobs, like this Medford, Massachusetts police chief made to apologize for a "Hillary Goes to Jail" costume he posted on Facebook.

At a time when students are being punished for kneeling protests at school sports games and being sent home for ridiculous and sexist dress code violations, it's not out of the realm of possibility that your kid could face official consequences for dressing up in a political costume for their school's Halloween assembly.

There are so many other clever, funny, and cute Halloween costumes for kids besides political ones that aren't such loaded topics so as to make everyone around them squirm uncomfortably. Just like polite conversation, stay away from religion and politics when it comes to your kid's Halloween costume.