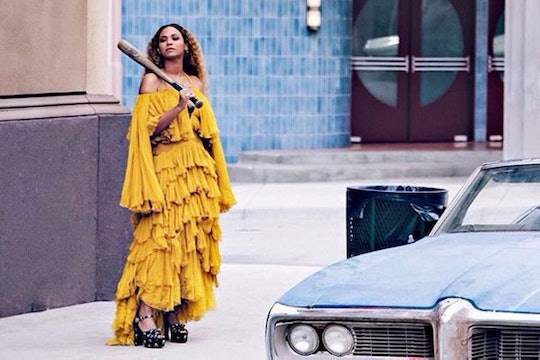 One of the best holidays on any calendar is, without a doubt, Halloween. And, as with most holidays, Halloween has become much more enjoyable since I become a mom and can now appreciate the holiday through my child' eyes. It's fun to dress kids up as tiny versions of characters, celebrities, and other random things that Pinterest leads you to believe are cute. But as cute and relevant as some costumes can be, they can also be outright offensive. From the costumes of beautiful Geisha girls to Mexican sombreros and ponchos, culturally driven costumes that are based on stereotypes or a history that a person wasn't a part of are horribly inappropriate.

This year, Beyoncé dropped her visual album Lemonade and it has quickly become iconic. And I get it. I love it too, and realize that Beyoncé is an inspiration to thousands of young girls and boys across the world. However, Lemonade is a piece of work built from bricks made of black culture and black history. It's not just a trendy music video with catchy tunes and cute outfits. Much like the Geisha and Mexican costumes, Lemonade-inspired costumes cross the incredibly thin line between cute kid costume and racially insensitive costume. Which is why — and I say this from a warm and loving place as a black woman — you shouldn't dress your white children as Beyoncé from Lemonade on Halloween. At all. Just don't do it.

The visual, musical, and very emotional masterpiece that was Beyoncé's Lemonade was an ode to the hardships of womanhood and relationships. However, the blatant truth is that, while non-people of color are more than welcome to appreciate the art and culture bursting through each scene of the album, doing so doesn't automatically welcome you to poach it and put it upon a child who may just be beginning to understand what race, culture, and diversity even mean.

Appropriation of black culture is problematic because, as parent who doesn't identify with the experience of black women, you're taking pieces of black culture to use as a Halloween "costume" or fashion "trend" without contributing to that same culture you've "borrowed" from. Then, in times of strife and oppression, non-people of color and their children are able to give those pieces back, take the Halloween costume off, and separate themselves from the black identity entirely.

As an adult, you know the story fairly well (or should). Centuries ago, during the birth of this nation, black people were brought to the United States in the slave trade from countries in Africa as well as the Caribbean. Once here, they were stripped of their cultures, identities, and languages. They were treated and viewed as property. But following the Civil War and the haze of Reconstruction, black people were awarded freedom from slavery (which, it's worth noting, came at the hands of white men), migrated to the North, and faced the oppression of Jim Crow laws and segregation. We have been tested and tested again and again, but even in our lowest moments, we managed to break boundaries and develop a distinct and rich culture — a privilege we know our ancestors did not have.

Unique aspects of black people, like our hairstyles, clothing, slang, music, style, art, writing, are all a part of a black culture that's taken centuries to build. Through American history, society has used our culture against us to create harmful stereotypes. For example, a black woman with natural hair and a loud voice is "ghetto" and treated as unprofessional. But a white woman with a man-made afro and a loud disposition is unique and quirky. Although we've been steadily re-building the culture we lost through the slave trade and in the centuries since, society has steadily tarnished our efforts by using elements of our black culture against us as tools of discrimination. From our hair to our language, the building blocks of our culture are used to count us out. Last month, U.S. Courts ruled that employers are allowed to discriminate against dreadlocks, a style primarily worn by people of color. Last year, studies revealed that job applicants with "black sounding" names were thrown to the side while less-qualified applicants with "white sounding" names were more likely to be called back. Pieces of our black culture and identity have been soiled as discrimination tactics and stereotypes at the hands of non-people of color. When white people choose to treat our culture as an all-you-can-steal buffet that they did nothing to help create, it's an issue. And when white people teach their children that it's OK to choose appropriation over appreciation, it's devastating.

The album itself transforms into this personal piece of black culture so intimate and so deep that watching others dip into for something like a Halloween costume, for their children, is at best hurtful and at worst downright disrespectful.

In Beyoncé's Lemonade, she displays large parts of the black southern female culture that's so much a part of the black experience. Proclaiming that she loves her nappy hair, to this idea that the woman — in a black family — is the rock who ends up enduring many bouts with lemons before having lemonade, they all speak to the rich history and culture black people have had to create from the ground up. In a society where loving my nappy hair and being proud to be black is an uphill struggle, it was empowering to watch a black woman like Beyoncé proudly represent our culture.

Beyoncé talks about this role of men in black families, the deconstruction of the black families, and the missing and longed-for father. She talks about the silencing of the black woman in the poetry of Warsan Shire in "Denial." She addresses the heaviest points of being a black woman in songs like "Daddy Lessons" where she talks about the legacy of the men missing, cheating, and lying in her family. She emphasizes the point through the Shire's poetry again on "Intuition" saying:

You remind me of my father, a magician ... able to exist in two places at once. In the tradition of men in my blood, you come home at 3 a.m. and lie to me.

The album itself transforms into this personal piece of black culture so intimate and so deep that watching others dip into for something like a Halloween costume, for their children, is at best hurtful and at worst downright disrespectful.

Yes, it’s OK if you and your kids sing "Sorry" all the way to school before drop-off. But you and your children can take off being black when it becomes an inconvenience to your lives. My son and I cannot.

With all that's gone into recreating our lost culture and developing our own senses of self in a world dominated by whiteness, it's a slap in the face and punch to the gut to watch white children "try on" what it means to be black on a night designed for fun and enjoyment. By allowing children to appropriate the pieces of black culture that are convenient and even exciting to them, you teach kids that their whiteness is superior, that other cultures and customs do not have to be respected, and that ignorance, however innocent, should be celebrated.

Yes, it’s OK if you and your kids sing "Sorry" all the way to school before drop-off. But you and your children can take off being black when it becomes an inconvenience to your lives. My son and I cannot. And that's where appropriation and appreciation depart. Appreciation of a culture means taking the time to learn about it in a respectful way while appreciating the people who make up that culture. Appropriation occurs when you take pieces of a culture as your own, completely disregarding the people who are a part of it, and use the culture as an "accessory" or "trend" that can be turned on and off like a light switch to your benefit.

Without a doubt, Beyoncé is an artist who has inspired hundreds of thousands of young girls and women of all backgrounds. In this last year alone, during a time where being black has become increasingly dangerous in America, Beyoncé inspired a new generation of black girls and women to appreciate their culture, their history, their noses, and their "Jackson Five nostrils." Lemonade was the apex of celebrating all that is black, bundled up into an hour-long presentation. I watched it as a black woman and felt a swell of pride for my black history. Often times, black culture is talked about in such a negative way, and black women in particular are talked about in ways that make us seem loud, "ghetto," uneducated, unattractive, objects of desire, and aggressive, but to watch Beyoncé represent our rich, inspiring culture without even so much as a nod to those stereotypes was glorious.

And so this year, on Halloween, all I ask is that you teach your children to appreciate a display of a beautiful culture without allowing them to take it on as their own.

More Like This
Ashley Graham On The “Fun, Organized Chaos” Of Raising Twins
10 Ways ‘Workin' Moms’ Is Basically A Crash Course In Parenting
Brooke Shields On Why We All Need To Talk About Aging In A Totally Different Way
10 Of Céline Dion's Best Quotes on Motherhood