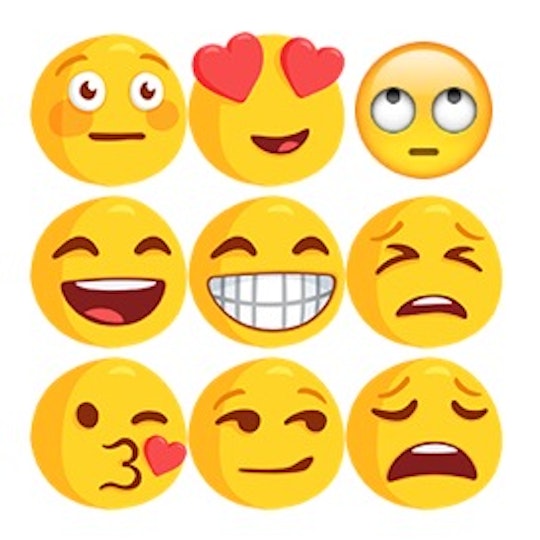 On June 1, Facebook swapped out its old Messenger emoji for a brand-new, inclusive set. As usual when it comes to Facebook changes, many people flipped — and not necessarily in a good way. And while, yes, the kissing emotion looks a bit like it's chewing something instead of expressing affection, you shouldn't uninstall the new Facebook emoji for one very good reason. They're way more diverse, very gender-inclusive, and they look the same across phones, regardless of whether you're Team Apple or Team Android.

If, like me, you only tend to use the odd smiley emoji or two to spice up your messages, the only difference you may have noticed was a slight change in style. And hey, I'm with you — you've grown used to a social media platform as you've always known and loved it, and now they're switching things around on you. The nerve! But if you delve further into why Facebook changed its emoji, you may just find your anger curbed.

We're diversifying the genders to create a more balanced mix that's more representative of our world. Now, using Messenger emojis, you'll see a female police officer, runner, pedestrian, surfer and swimmer for the very first time, and we'll keep rolling these out. In an effort to make the emojis you send a better representation of our world, you will also be able to pick the skin color you prefer. ... Also, at launch, we have emojis representing red heads for the first time.

Although I don't think that the yellow smiley emoji of yore were necessarily offensive to any races, the "people" depicted in action (whether going to work, painting their nails, or biking) were always, always white. Caucasian depictions shouldn't be our default representation of people, and Facebook's new skin color options are much more true to reality. They allow people to express themselves in a more authentic way and do a far better job of representing the full range of people who actually use the social media platform.

Another glaring problem that Facebook emoji had was how they represented women. Women weren't depicted in professions, like men were in the emoji (as police officers, firemen, and businessmen). Instead, they were relegated to wearing pink shirts, showing off their painted nails, dancing, being brides, or dressing up as scantily-clad bunnies. (Oh, you know, just your average, everyday activities as a female human being.)

Emoji may not be a huge part of your life — but then neither will those few small design changes that you hate so much. Whether I like the new kiss emoji or not, it doesn't really matter. It's a win for society as a whole when people of color are equally represented, and, considering that my life consists more of working and biking and hiking than it does nails and weddings, I might even venture further into the world of emoji.

So go a head and uninstall the new Facebook emoji, if you must. However, before you do, consider: You might hate that new smiley face, but isn't it nice to see friends represent themselves in a way that actually reflects them? For me, that's worth that little fish-face kissing emoji and the empty eyes of the smiley emoji all the way.