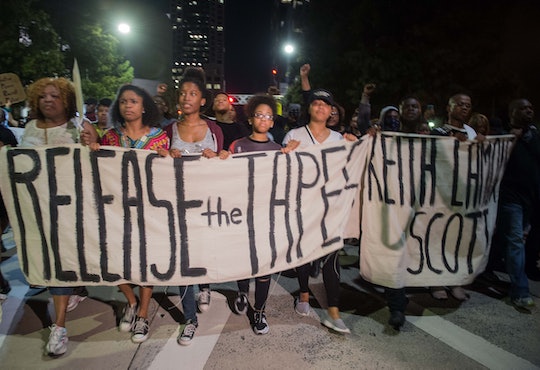 Why You Shouldn't Watch The Keith Lamont Scott Shooting Video

Charlotte police had been under intense pressure in recent days to release the video of the latest fatal police shooting of a black man. But on Saturday, police released portions of bodycam and dashcam footage, along with a gun police say the victim was holding when he was shot to death by an officer. Many can and will argue that the police footage will be able to provide answers and context to the tragic event, but there are also many reasons why you shouldn’t watch the Keith Lamont Scott shooting video.

Whether or not you decide to watch the video is entirely a personal decision, but watching the disturbing footage is not always the right response to a situation like this. While the footage may provide insight, there are other ways to honor Scott's memory and fight the racial bias in America that rears its ugly head far too frequently.

Even though the video that was released by police on Saturday doesn't show or offer audio of the actual shooting, Police Chief Kerr Putney announced at a news conference, according to ABC News, more footage will follow.

Both peaceful protests and violent riots erupted in the aftermath of Scott's shooting on Sept. 20. Scott was fatally shot by an African American police officer, Brentley Vinson, while police were at an apartment complex in Charlotte's University City neighborhood searching for unrelated man with outstanding warrant. Scott was reportedly waiting for his son's school bus when the incident occurred.

Police say the 43-year-old was carrying a handgun, but his family maintains that he did not have a gun at the time of the shooting.

Before the footage's release on Saturday, Putney stated prior to the video release gave "no definitive visual evidence that [Scott] had a gun in his hand," adding to the highly disputed debate surrounding this case.

While the new footage is surely newsworthy to many viewers and it will be the driving force behind many conversations on social media as well as in the mainstream media, the public interest and current significance does not mean anyone is obligated to watch it. Scott, a father of seven, did lose his life in this footage.

So, instead of watching and sharing this footage, unless you personally choose to, you can do your best to keep up-to-date on the proven facts of the shooting. Even further, you can engage in conversations that work towards a solution to the racial prejudice in America and honor Scott's memory by coming together to reform the oppressive system and systemic racism people of color face on a daily basis.