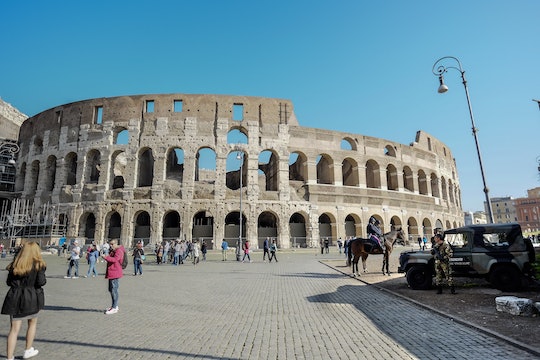 Thursday, a day after the Islamic State put out a video threatening NYC, ISIS released a propaganda video targeting France and Italy. The video features two suspected members of the terrorist group. One fighter threatens more Paris attacks, while another fighter mentions a "conquest of Rome." Just yesterday, the jihadi extremist group released a video seemingly threatening New York City, using propaganda to get more eyeballs on their hateful cause. And that's exactly why we shouldn't watch that video, or any video ISIS releases.

In response to the latest video, authorities took appropriate action. Italy increased security around the Vatican in Rome and sent 1,000 military personnel to posts the country. CNN points out that St. Peter's Basilica in Rome, as well as Milan's Duomo and La Scala, could be terrorist targets. The U.S. embassy in Rome is warning Americans currently in Italy that houses of worship, restaurants, theaters and hotels in Rome and Milan might be vulnerable for attack.

France continues to exist in a state of emergency, as lawmakers in the French National Assembly on Nov. 19 voted to extend the state of emergency for three months. During this time, Paris will focus more attention on borders, and is continuing to ask for a global coalition to in its air strikes on launched on Raqqa, the de-facto Islamic State capital in northern Syria.

Back at home, as these threats come in on Twitter, on TV, and on my computer screen, I am plagued with anxiety, sadness, anger, and lack of power every time a new video surfaces that promises more violence. There's a natural impulse to want to watch these videos. It's instinctual to want to find out exactly how you're begin threatened, what to look out for, and if there are any further precautionary measures you could take. But every time you feel that impulse, you have to speak back to it. Here's why. Paralyzed with fear is exactly how the makers of these propaganda videos want you to feel. They are banking on my feelings of anxiety, sadness, anger, and lack of power. So the best thing I can do as an American citizen who with empathy for those who are suffering, and yet hopeful for a world where peace is possible is not to watch extremist propaganda, not to buy into it.

In the past, some people have expressed on social media justhow much anxiety ISIS threat videos gives them.

And that's because these videos are promoting fear.

Maybe you agree with me that you should boycott these videos. Maybe you don't; after all free speech is one of the hallmarks of our country. But before you click on anything yet, here are some reasons not to watch any of the ISIS propaganda videos.

Mild PTSD (which exists on a spectrum) can occur from watching a video of real or the threat of real violence more so than watching fictional violence (like horror movies). Psychologist Dr. Pam Ramsden from the University of Bradford told the Daily Mail last year that research shows people who watch threatening or violent material on social media are at a greater risk of suffering symptoms of trauma."Previously it had been assumed PTSD symptoms could only be experienced by those who had personally witnessed violence or shared the experiences of the victims." Secondhand exposure through social media can be as harmful, she said.

Reading About Violence Is Enough: You don't Need To See It

Studies show there is increased thinking function from the brain when you read something, like news that might be violent or threatening. You have the time to reflect about the words you process and comprehend any alarming news. Respectively, there's an increase in emotional, impulsive behavior when you see a visual stimulus like a video, according to Dr. Dale Archer, who talked to HuffPost Live last year when a string of violent ISIS videos hit Twitter.

Shock Value Is What Extremists Prey Upon

It's no secret that terrorist groups rely on shock value to command media attention, especially on new media outlets, which are free, and easy for people en masse to access at any time.

You Could Be Spending That Time Elsewhere

What I hate about these videos, is that they give the impression that you're an informed citizen because you know about a threat or what atrocity took place. But watching something, no matter how life-altering it can be, is really only life-altering if you do something to change the status-quo. You can do that however suits your needs, but passively watching a video is not it.

The idea of what's going on in the world, as Marvin Gaye sang in 1971, is obviously necessary for every citizen to contemplate. And though these are scary times, there's no reason for fear to ruin your life. It's not going to ruin mine because I'm making a conscious choice not to fear the unknown.

There's No Research That Says Watching These Videos Is Helpful

That's pretty self-explanatory. There are no proven benefits to watching any type of fear mongering explained Dr. Dale Archer in that same HuffPost Live segment. So you might as well use your energy to combat some of the anxiety threatening propaganda can have on people.

So, to recap, don't watch the videos. It may be one of the most important decisions you make.