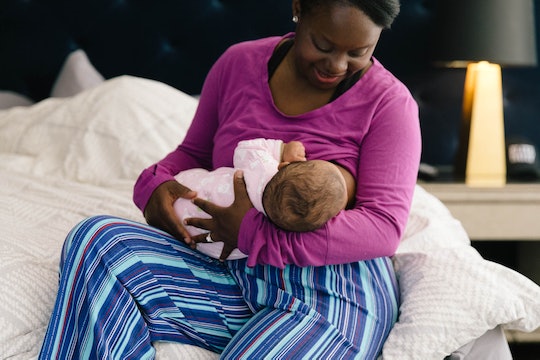 Why Your Baby Nurses For Comfort, According To Science

Ask any breastfeeding mother if she thinks breastfeeding comforts her baby, and I bet you'll get a 100 percent (or close to it) response rate in the affirmative. That doesn't mean everyone agrees on whether or not comfort nursing, also called nonnutritive sucking (NNS), is a good thing for mother and child. But since three quarters of Western babies use a pacifier, as reported by The New York Times, empirical evidence alone demonstrates that babies have a strong sucking urge, which could explain why your baby nurses for comfort. If you've already decided to make comfort nursing part of your parenting repertoire, you'll inevitably have to deal with "human pacifier" criticism. Now you can respond that the science is on your side. From its use as a pain reliever to a sleep inducer, research demonstrates the range of ways that breastfeeding comforts babies.

From shots to teething, babies often nurse for comfort when they are in pain. A 2012 study published in the Journal of Pain and Symptom Management demonstrated the use of NNS as an effective pain reliever during vaccine shots. While the babies in the study were given pacifiers to suck on during their vaccinations, I can attest that nursing serves the same purpose. I've used breastfeeding during and after shots as a way to comfort both of my children. Similarly, The American Society for Pain Management Nursing (ASPMN) recommends the use of a pacifier for NNS during infant circumcision procedures.

Being in pain can be stressful, so it's not surprising that research shows a link between nursing and the ability to cope with stressful situations. According to a study published in Stress: The International Journal on the Biology of Stress, there is a positive connection between early breastfeeding and swift cortisol recovery in 1-year-olds. After exposure to a stressor, like meeting a new person or experiencing a brief separation from mother, breastfed babies showed a faster cortisol recovery. This is important given all researchers know about the negative effects of high cortisol levels on children's development. Nursing for comfort soothes babies after they are scared or stressed, as I've also witnessed in my kids. For example, barking dogs have startled both my children when they were babies, and putting them to the breast was always the fastest way to calm them down.

In addition to managing pain and stress, breastfeeding helps babies fall asleep. This is why children often want to nurse to sleep, and may keep sucking even after their eyes are closed. Research shows that breastfed babies have higher levels of Cholecystokinin (CCK), according to Early Human Development, which "is known to induce satiety" and contribute to feelings of sleepiness and sedation. While CCK production can be stimulated by sucking on a pacifier as well, CCK levels are highest after breastfeeding.

Additionally, "the possible role of human milk nucleotides as sleep inducers," published in Nutritional Neuroscience, found that three nucleotides associated with sleep — 5'AMP, 5'UMP, and 5'GMP — show up in greater levels in breast milk at night, which could contribute to "inducing hypnotic action in the infant."

Last but not least, a charming study in Australia, published in Early Childhood Development and Care, collected the feelings and motivations toward breastfeeding from a group of mothers and older nursing toddlers. "When mothers were asked why they thought their child breastfed, they most frequently stated that their child breastfed for comfort . . . thirdly because of the intimacy and closeness involved in breastfeeding," the study concluded. So there you have it. There's plenty of science to explain why your baby nurses for comfort, but you will also hear it straight from the mouths of many moms.