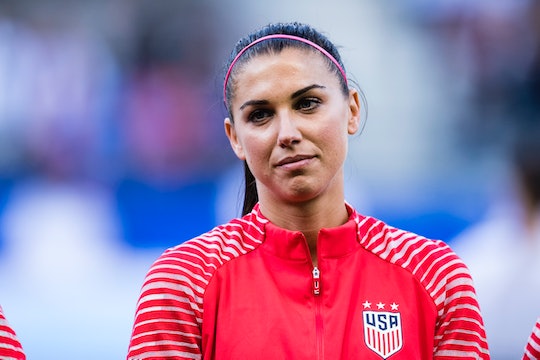 In October, soccer star Alex Morgan revealed she's expecting her first child with husband and fellow athlete Servando Carrasco. The baby is due in April, just four months before the Olympics, an event Morgan has played in multiple times before. And although no new parent should feel pressure to return to work right away after giving birth, it's arguably fair to wonder whether Alex Morgan will play in the 2020 Summer Olympics. As it turns out, Morgan can't wait to get back onto the field after welcoming baby number one.

In case you missed the cute announcement, Morgan is expecting a baby girl, set to arrive in the spring. She didn't reveal the exact due date just yet, but the co-captain of the U.S. women’s national soccer team will definitely be a mom by the time the 2020 Summer Olympics begin in Tokyo, Japan on July 24.

So does Morgan plan to lace up her cleats in time for the big event? Rejoice, soccer fans because the answer is yes. “I hope to get back on the field as soon as possible,’’ the 30-year-old told USA TODAY Sports Tuesday. “After having a healthy baby, I want to get back with the national team and look forward to playing in Tokyo.’’

Making Morgan even more badass? She plans to continue her career as her daughter grows up. “There are so many women that have been able to come back to their respective sport after pregnancy and continue to have a successful family while playing their sport that they love at the highest level,’’ she explained.

Morgan continued, “I plan to follow in those footsteps and be one of those women who have a family and carry my daughter around as I’m going to the next city to play. And I still want to continue to enjoy the sport that I’ve been playing for all my life.’’

Of course, getting back into the swing of things shortly after giving birth doesn't make you a better person or parent than someone who doesn't. But it's admirable how Morgan plans to demonstrate how moms can be awesome parents while still living out their dreams.

It's also worth pointing out here how Morgan probably has resources — monetary or otherwise — that some parents might not. And being able to work while caring for your child is often a team effort, so I assume the athlete has a great support system to make this all happen.

Lastly, Morgan will have to keep a close eye on her health in the months after delivery. Someone who has been there before is Beyoncé, who said she "pushed" herself to the limit by performing at Coachella less than a year after delivering her twins, Rumi and Sir, in June 2017. But as I mentioned earlier, Morgan seems to have an awesome team by her side and only she knows her body best.

So here's to cheering on Morgan as she enters motherhood and a new chapter of her career, kicking off at the 2020 Summer Olympics.