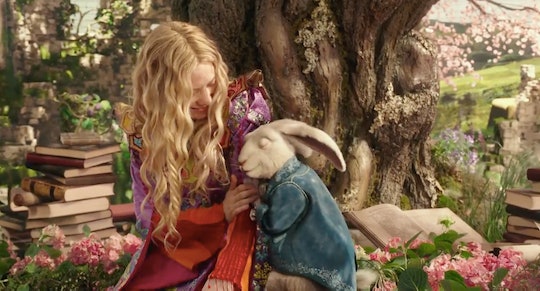 Will 'Alice Through The Looking Glass' Be On Netflix? Fans Are Definitely In Luck

Alice In Wonderland fans have been gearing up and setting their movie theater plans for Friday’s release of the highly anticipated sequel Alice Through The Looking Glass. If the 2010 Tim Burton blockbuster is any indication of how successful and entertaining the sequel will be, then you’ll probably want to see it more than once — but definitely won't want to spend a fortune at the concession stand again. If that happens to be the case, which it probably will be, you might be wondering whether Alice Through The Looking Glass will be on Netflix so that you can binge-watch at your leisure later on (or as you prepare for an inspired Mad Tea-party). We’re all in luck, thanks to an exclusive deal made between Netflix and Disney that will put certain movie titles onto your preferred viewing device by September.

As long as you have a Netflix subscription, or least your roommate’s password, you’ll be able to watch Alice Through The Looking Glass by fall of this year. The deal between Netflix and Disney — signed three and a half years ago — means that Netflix is set to gain exclusive Disney licensing for all the latest movies from Disney and its affiliates. That includes Marvel, Lucasfilm, and Pixar.

The contract starts with 2016 theatrical releases, some of those titles include Zootopia, The Jungle Book, Captain America: Civil War, and Finding Dory. The blockbuster space film Star Wars: The Force Awakens was released in 2015, so unfortunately it’s not included in this deal.

“The 2016 (Disney) releases will start rolling on in September and we’ll share specific dates/titles closer to their premiere on the service,” a Netflix rep told Variety in an article published on Monday.

Once Disney’s content has been uploaded to the streaming service this fall, it will be available for instant viewing on multiple platforms, which include your television, smartphone, or tablet.

“Disney and Netflix have shared a long and mutually beneficial relationship, and this deal will bring to our subscribers, in the first pay TV window, some of the highest-quality, most imaginative family films being made today,” chief content officer at Netflix Ted Sarandos told Variety in 2012 after the contract had initially been signed. “It’s a bold leap forward for Internet television, and we are incredibly pleased and proud this iconic family brand is teaming with Netflix to make it happen.”

While the streaming option isn’t instant, it’s a great alternative for previewing before settling in with your toddler for a Disney film Friday night at home. Tim Burton’s signature dark and kooky style will definitely be present in Alice Through The Looking Glass may not be suitable for all children, so being able scan through the film beforehand is a definite perk of the deal.

These new developments the streaming service make it even easier to justify spending less than $10 a month on at home entertainment. But, if you're still not ready to commit your credit card to that charge, you have until September to lock down a Netflix password. These films may look better on the big screen with a bucket of popcorn in your lap, but watching them in the comfort of your home with any delivery option available at your fingertips and no line for the bathroom is just as good, if not better.