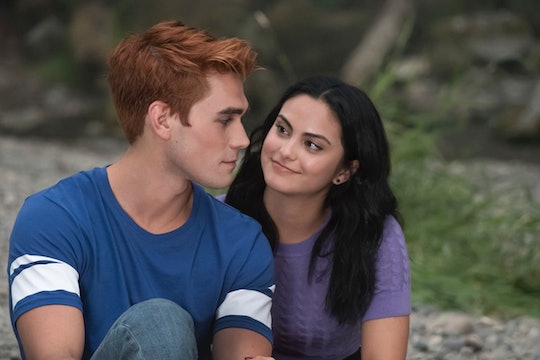 Archie Might Do Real Jail Time On 'Riverdale' Season 3

It's hard to believe that there have only been two seasons of Serpents, Ghoulies, and callbacks to the Archie comics on Riverdale. But going into Season 3, there’s still plenty to look forward to. At the end of last season, Archie was hauled away by Sheriff Minetta after being accused of murder in a plot that likely has Hiram Lodge at the center of it. But will Archie go to jail on Riverdale? I can't imagine the show without him, or an entire season dedicated to seeing Archie in the clink, fighting for his life. However, according to Riverdale showrunner Roberto Aguirre-Sacasa, Archie could spend some time behind bars in Season 3.

"The prospect of Archie in a juvenile detention center is pretty delicious,” he told TVLine. He also said that there could be come courtroom scenes this season, but it was all a build-up of Archie and Hiram’s fight for power. "I think Archie was playing a very dangerous game all throughout Season 2," Aguirre-Sacasa added. "He was attracted to Hiram’s power, and the way he moves through the world. And he got bitten in the bum by it. It’s major consequences for the stuff he’s been doing in Season 2."

The Riverdale Season 3 promo doesn't give much away, but there are a couple of blink-and-you’ll-miss-them shots of Archie in a jail transport bus and then in what looks like a jail or detention center basketball court. So chances are, Archie will be doing time in some capacity.

The promo also shows Archie, Veronica, Betty, and Jughead spending a seemingly idyllic summer swimming and riding in his iconic jalopy. So if Archie does go to jail, it probably won't be for long. The better question is what he’ll do when he gets out, knowing that it was probably Hiram who set him up.

The murder case itself will likely get thrown out before it goes to trial or shortly thereafter. Archie was arrested for the murder of Cassidy, one of the intruders who’d tried to attack Archie and the gang when they were at the Lodge’s lake house in Season 2. One of Hiram’s henchmen ended up killing Cassidy and Archie went about his business as an unsupervised teen with his girlfriend would, but now the whole ordeal has come back to the surface. Without substantial evidence, there probably won't be much to hold Archie on.

If Archie’s jail time is a little more severe than his friends would like, though, Cole Sprouse, who plays Jughead, is certain that Jughead would be the one to bust him out. "I think Jughead’s gonna try and lead the charge and break him out of prison," he told TVLine. With Jughead as the new official "king" of the Serpents, I doubt he’d have time for those kinds of shenanigans, but there is a scene in the promo of a certain signature Serpents tattoo on Archie’s arm. I’m not sure if it’s just for show or if something bigger goes down when he’s in jail, as the promo makes it seem. He could have been made a member of the Serpents for his protection, on Jughead’s orders, but when he inevitably gets out of jail, it’s going to be interesting to see how Archie’s potential gang member status goes over with Fred.

All of the Riverdale characters are central to the show, but Archie is, well, Archie. There’s no way he’s going to spend the entirety of Season 3 in jail. He will, however, probably do a little time before he’s cleared of the charges and ready for revenge.