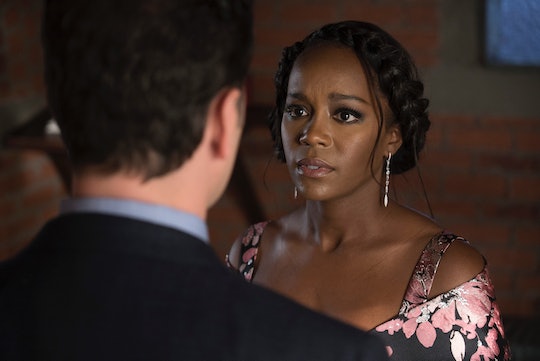 Here's Where Asher & Michaela Stand On Season 5 Of 'HTGAWM'

Michaela Pratt is spending Season 5 of How To Get Away With Murder experimenting with "fapstinence" (I know, I'm sorry, but it's a direct quote) and trying to convince anyone who will listen that she doesn't have a secret crush on Tegan Price (yeah, OK). But an encounter with her drunk ex has fans wondering: will Asher and Michaela get back together on HTGAWM? It's a polarizing topic.

Asher and Michaela give off Ross-and-Rachel level destined-to-be-together vibes. But on the other hand, lots of fans seem to flat-out hate the idea of them together — probably because Michaela is a strong, competent character while Asher is... less so. Of course, Michaela isn't perfect either. Rather than admitting her relationship with Asher wasn't fulfilling all of her needs last season, she cheated on him with the very sexy, very powerful Marcus Walker, the White House Press Secretary from Scandal whom Michaela crossed paths with in the Scandal/HTGAWM crossover. When Asher found out, he was understandably pissed and broke things off. But he's been passive aggressively attention-seeking in Michaela's direction ever since, much to both fans' and other characters' annoyance.

At a press screening of the Season 4 finale last March, showrunner Peter Nowalk admitted that it was going to take a lot for Asher and Michaela to move past this betrayal, if they do at all. "I think it’s going to be a long road for Asher to forgive Michaela," he said, according to Deadline. "They’re not going to have a lot of time to sit down and have couples therapy right now."

But in Episode 7 of Season 5, titled "I Got Played," Asher overindulged a bit at Connor and Oliver's co-bachelor party and Michaela wound up tucking him in at the end of the night. With his guard down, Asher asked her to stay and cuddle him because he missed her and she briefly obliged. Could their romance be rekindling? Well, right after she slipped out, Michaela ran into Gabriel and they wound up making out. So maybe not.

I don't think anyone was doubting that Asher still had feelings for Michaela, given his frequent bids for her attention this season, but the drunken encounter obviously confirms that his attempts to hate her are failing. On the other hand, Asher's space from the group seems to be doing him some good. He was always the most sensitive member of the Keating Five, the one who took their illicit deeds the hardest. By contrast, Michaela has the cold, cutthroat detachment of a Baby Annalise. Not being with her and missing out on being in AK's law clinic means that Asher is a little freer to find himself this season. According to Variety Nowalk said, "Asher will come back into his own this season." Continuing, “Asher is growing up and sort of becoming the person he’s meant to be.”

It seems unlikely that Asher and Michaela will hook up at the wedding, considering a flash-forward already revealed that Asher hooks up with Connor's mom there. (Ugh, my dude.) But fans can check out everything that the midseason finale has in store when it airs Nov. 15.