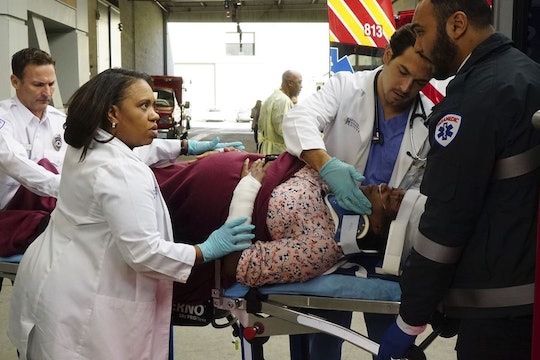 Will Ben Lose His Job On 'Grey's Anatomy'? His Career Is At Risk

We all knew Thursday's Grey's Anatomy would be crazy and emotional. Anytime Shonda does a two-hour event you know something's about to go down. This episode was no different. The "previously on Grey's Anatomy" focused solely on Ben's actions with the clipboard in the psych ward a few weeks ago, and then his interactions with Dr. Bailey after, it was clear this episode was going to be focused on Ben and Bailey. More specifically, it turned into a will Ben get fired on Grey's Anatomy, or won't he get fired game after another major screw up during a lockdown.

As expected, once the lockdown (caused by a Code Pink) ended, it was revealed that Ben had performed an emergency C-section on a patient, Gretchen. With blood everywhere, Bailey barely had time to think before Ben was running to the NICU with the baby and Bailey was helping De Luca with the patient, Gretchen.

While both Gretchen and her son are being operated on, Bailey is left trying to piece together what happened. According to DeLuca, Ben did everything right. He claims that because of the lockdown he, Ben, and the patient were trapped because the doors were locked. The patient became hypertensive and Ben and DeLuca believed both Gretchen and her baby would die if they didn't operate immediately.

According to Meredith, she had checked on Gretchen who was stable and then went to help out with Gretchen's husband. Dr. Weber then told Bailey that he saw Arizona in the room with Ben, DeLuca, and Gretchen but Arizona says when she checked if the patient was stable and then she left expecting Ben and DeLuca to take Gretchen to get a CT.

Finally, Bailey checks the security video and the truth comes out. Although everything Ben and DeLuca said was technically true, they left out one key detail: the elevators doors were open. Warren, DeLuca, and Gretchen could've gotten into the elevator. Would it have made a difference? Maybe not. But the fact that the opportunity was there means Ben should've taken it.

So what happens now? Bailey's got an advisory board together consisting of Meredith, Owen, and Maggie and although Ben keeps saying he didn't see the elevator doors open, each time they watch the video it seems to be clear that he did. Based on the video, it doesn't look good for Ben.

Unfortunately for Bailey, as chief it's her call what happens to Ben. She makes the call that Ben will be put on six months suspension, causing Ben to lose his cool. He explains that he'll be behind after six months, creating a "death sentence" for his career. It certainly will create some tension for the couple moving forward. Hopefully they'll be able to move on — although that seems like a big wish.