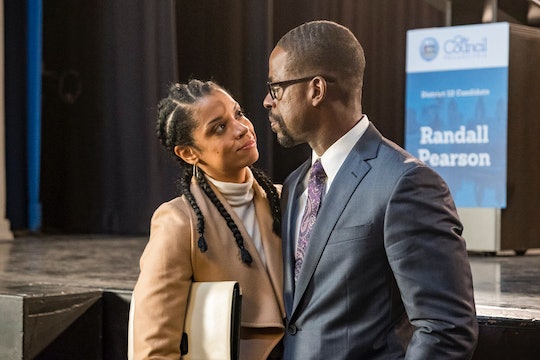 Until recently, the only things certain on This Is Us were death, tears, and Beth and Randall. The last viewers saw of the former power couple, Beth had asked Randall to drop out of the city council race and Randall was sleeping on the couch. This left most fans a tad distraught, wondering: Will Beth and Randall separate on This Is Us? Besides their latest fight in present day, it looks like they may not be together in the future, so things are looking grim for the one Pearson family who seemed to have been holding it together.

In the flash forward at the end of the fall finale, viewers saw Beth running her own ballet studio and Randall asking Tess if she called her mother. If Randall and Beth were still together in the future, I feel like he would be the one to call her himself. That's one sad point in the separation column. I also didn't see a wedding ring on Beth, so that could be another strike against them as a future couple. Things just aren't looking good for them and while it's entirely possible that Beth and Randall make it through this rough patch, they might have a long road ahead of them.

Susan Kelechi Watson, who plays Beth on This Is Us, recently teased to Entertainment Weekly that Beth and Randall are going through something big. Although she didn't elaborate on whether or not it means they're headed for a divorce or separation, she did say, "There’s no easy resolution." That could mean Beth and Randall reluctantly decide a separation is best, or they trudge through the murky waters of this big pause in what was once a strong marriage. They've been together for long enough and have been through enough already to have a strong foundation. If Jack and Rebecca can do it, Jack Pearson 2.0 can handle it, right?

Watson did say that more will be revealed about the fate of Beth and Randall's relationship, but she couldn't be any more candid than that. If I had to guess, I would say that they're in for several more episodes of hard times and butting heads, but that they'll make it out of this together.

Beth making Randall sleep on the couch was a major turning point in their relationship, but it doesn't have to mean this is the beginning of the end. It could be the wake up call he needs to realize that he can't keep making decisions without thinking of their family first, i.e., quitting his high paying cushy job on the spot and running for office with zero political experience. He did tell Beth that if she ever got uncomfortable or unsure of his running for city counsel, he would withdraw. So when she did and he didn't, she had every right to send him to couch town.

Things won't be easy for them in the coming episodes, but I think they can make it out of this tough period together. If Beth and Randall do separate, I can't see it being for anything longer than a temporary separation to gather their bearings apart before they come back together to face the struggles of their marriage.

If Beth and Randall separate more permanently, however, there will officially be no hope left in the This Is Us universe. Everything bad that can happen to these multiple generations of Pearsons seems to have happened, so can they please catch a break? I also feel like the devastation of losing Beth and Randall as some fans' favorite couple will be too much. Let's just not go there.