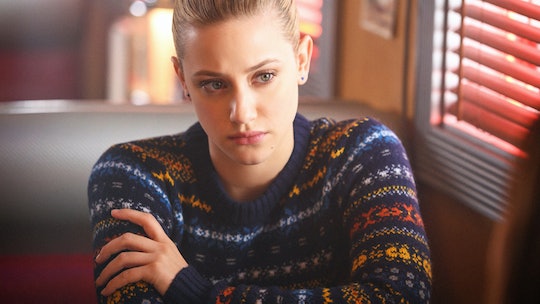 Betty Needs To Get Alice Out Of The Farm On 'Riverdale', Like, Now

Betty needs to shut down The Farm and she better do it fast. The CW's Riverdale has been building up the threat of The Farm ever since its introduction in Season 1. While the Gargoyle King is seemingly out of the picture for the time being, The Farm has taken a spot front and center as Riverdale's big bad. With the mysterious cult taking over the town, fans can't help but ask if Betty will get Alice out of The Farm, along with Polly, Kevin, and now Cheryl.

If you need a bit of a Riverdale refresher, I don't blame you. The CW drama has been on hiatus since Mar. 27 and finally back for its 18th episode on Apr. 17. In "Chapter Fifty-Two: The Raid," fans learned that The Farm's leader, Edgar Evernever, who is played by Chad Michael Murray, convinced Cheryl to join the cult after he revealed that he had the ability to let people speak to dead loved ones. So Cheryl joined to talk to Jason. When Betty found out about Edgar's alleged power, Alice told Betty that she joined because Edgar let her see her deceased son, Charles. But, it doesn't look like this is the end of Betty vs. The Farm just yet.

In the promotional trailer for Riverdale Season 3 Episode 18, titled "Chapter Fifty-Three: Jawbreaker," the network teased that something is going to go down between Betty and The Farm soon. "You're a daughter who wants her mother back," a voice says as clips of Betty and her mother flash by. One brief clip shows someone burning a photo of Alice and Betty. The next shows Betty standing next to a blindfolded woman, who looks a lot like Alice.

Later, viewers see a clip of Alice and Betty crying in a car together. Could it be that Betty actually gets Alice out? It's too soon to tell for sure, especially when the trailer jumps to Edgar, who says, "She needs to heal," quickly followed by Alice crying, "How can I trust you, you lied to me?"

Then to escalate the drama even further, the trailer ends with Betty throwing Evelyn up against the wall at school. "I will kill you," Betty says. Yikes. Dark Betty is not playing.

In an interview with TVLine, Murray revealed that fans will get to "see Edgar and Betty sit down" in the Apr. 17 episode and fans will finally get answers and see what The Farm truly is to Edgar.

"We are going to hear Edgar’s explanation for what The Farm is, and what the movement is about," Murray said. “He’s going to open up to Betty.”

While Murray didn't go into the details of Betty and Edgar's conversation, nor did he explain what this means for Alice's future, the actor did tease that fans will get to learn more about Edgar's relationship with Evelyn and her "place in the entire operation."

Although we don't know what lies ahead for Betty, Alice, or The Farm, it looks like the big plan will come to light sooner than later. Until then, fans will have to wait and hope that no one dies in the process.

Riverdale airs Wednesdays on The CW.