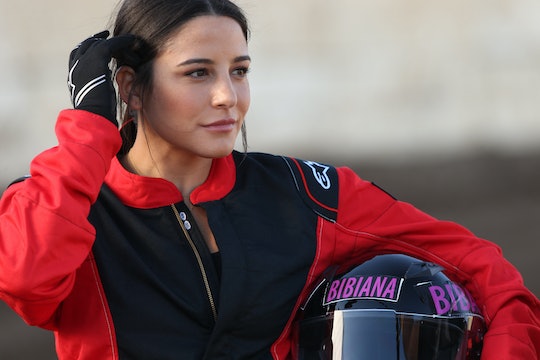 Fans Are Already Hoping Bibiana Will Be The Next Bachelorette

Arie Luyendyk Jr. made a pretty unpopular cut in his third week as The Bachelor when he neglected to give former Miami Dolphins cheerleader Bibiana Juliana a rose at the end of the episode. Between ex-GLOW wrestlers heckling her and having her specially planned romantic gesture for Arie coopted by the other women, she was already having a pretty tough week. So will Bibiana be the next Bachelorette? She has two pretty high-profile cheerleaders in her corner already.

Wells Adams and Evan Bass are both rooting for Bibiana to be the next Bachelorette. Or president. Whichever. Wells and Evan were both contestants on JoJo Fletcher's season of The Bachelorette who went on to Bachelor in Paradise with varying levels of success (Wells became the in-house bartender; Evan got married to Carly Waddell and has a baby on the way). Their quirky senses of humor made them Bachelor franchise favorites and they obviously see a spark of something similar in Bibiana.

While it's too soon to realistically speculate whether or not Bibiana will be the next Bachelorette, we do know she'll compete on The Bachelor Winter Games, the Winter Olympics-adjacent franchise installment which intends to marry Bachelor in Paradise's hotbed of romance with competitive winter sports. Because sure, why not?

It was particularly heartbreaking to watch Bibiana go home during a week where she tried so hard to be a good sport through a super daunting process that wasn't really for her. She struggled all season to get time to speak with Arie and she wasn't shy about confronting the women who got in her way (ahem, Krystal). This endeared her to fans and they're clearly upset that Arie wasn't interested.

Then, during her final group date, which involved pitting the women against each other in an over-the-top wrestling tournament, the show brought in two actual alums from the 1980s TV series GLOW to train the women for "GLOB" — the gorgeous ladies of The Bachelor, of course. But rather than empower the women, the two wrestlers heckled them cruelly, humiliated them for having feelings, and got physically aggressive with them without asking before the wrestling portion of the date even began. Bibiana bore the brunt of their rude behavior, getting called "pathetic" for feeling upset and having her mom insulted for "not knowing how to spell" when she chose her name. But she put on a brave face (and a Godzilla mask) and got into the ring for the tournament anyway, competing as her character "Bridezilla" (get it?).

Finally, at this week's cocktail party, she set up an elaborate star-gazing mini-date, which involved erecting a huge bed in the middle of the mansion's grounds and putting up a telescope. But before she could reveal her romantic gesture to Arie, he stumbled upon it himself, assumed producers put it there for him, and proceeded to parade the other women through his special romantic secret spot. Bibiana was understandably crushed that her surprise was not only ruined, but being enjoyed by other contestants. To be cut after all that must have been exhausting.

Suffice it to say, Bibiana got a bum deal on this season of The Bachelor, and hopefully, she'll get a chance to show us her entertaining and fun-loving self on The Bachelor Winter Games. She even has the support of female Bachelor alums, with former Bachelorette Rachel Lindsay tweeting, "I personally will miss Bibiana."

You can catch her on The Bachelor Winter Games when it premieres on ABC Feb. 13.