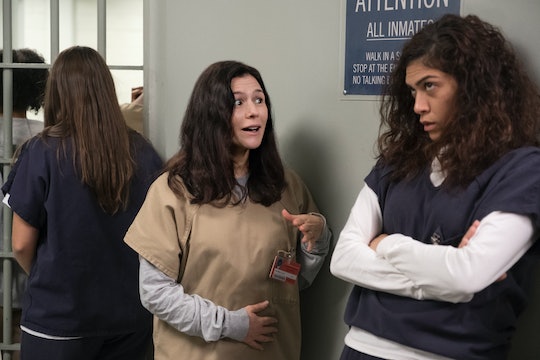 Blanca’s story on Orange Is the New Black has had a lot of highs and lows. She started off as the inmate who refused to shower and rarely spoke to anyone unless she absolutely had to. She evolved into someone fans came to appreciate and when she was sent to an ICE detention center at the end of Season 6, her future was uncertain. Taking the fall for a hit and run landed her in prison, but now that she has been detained, viewers are probably wondering if Blanca will get deported on Orange Is the New Black before the series is over.

She was originally led to believe that, like Piper and Sophia, she was going to be released from prison early. At the end of the Season 6 finale, however, while Piper and Sophia met their families outside of the prison, Blanca was arrested and ushered to a bus to be taken to an ICE detention facility. Now, she is still in the same detention center and unless she finds a way to fight her Green Card being taken away, she could be deported by the time the series ends.

In an Episode 3 flashback, Blanca did earn her green card well before she was arrested and thrown in prison. In present day, she asked her boyfriend Diablo to find out why her permanent resident status had been revoked. It turns out the crime that landed her in prison could be partly to blame. Although a U.S. green card does grant a citizen the same rights as a U.S.-born individual, it can be revoked if the card holder commits fraud or illegal activity. Because she was arrested and convicted, that falls under the category of criminal activity, which warrants Blanca’s permanent resident status being taken away.

But while Blanca’s original arrest sent her to Litchfield, it was actually her part in the riot from Season 5 that got her green card revoked. Unlike some of the other participants in the season-long prison riot, Blanca didn’t get extra time added to her sentence and she cooperated with investigators afterward. She was even promised an early release, which she took to mean that she would go home. Instead, it seems, the goal was to send her back to a country she hasn't lived in for 15 years.

In real life, green card holders who were convicted of crimes decades ago are now finding themselves facing deportation because of their green card status. One New Jersey man who came to the US in 1988 and was convicted in 2007 of two counts of unlawful possession of a gun was arrested in 2018 by immigration officers. So what Blanca is going through is not unheard of, especially since she was still serving part of her prison sentence when she was detained.

Right now, Blanca’s future looks grim. Diablo told her an immigration attorney said her chances of fighting this aren't good and now that he has been taken away by ICE himself, Blanca doesn't have anyone else on the outside to help her fight her deportation. There is the chance that some of their friends who were sent to work in the kitchen could help Maritza, who was apparently born in the U.S. Blanca, on the other hand, probably won't be so lucky.

Hopefully by the end of the season, she can get justice, but I don’t see that happening. Unfortunately, some OITNB characters aren't going to get happy endings and Blanca may be one of them.