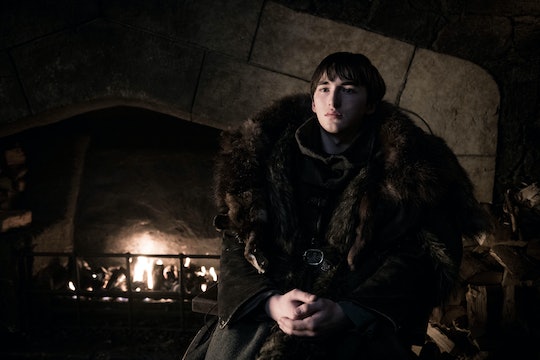 Jaime's Past Crimes On 'Game Of Thrones' Might Go Unpunished

Besides Littlefinger convincing Lysa to poison Jon Arryn, which sent Robert to Winterfell to ask Ned to be his new hand, Jaime pushing Bran out of a window jump started the events of the series. That one incident ignited a war between the Starks and the Lannisters and eventually led to the Red Wedding. And now that he's back in Winterfell for the first time in years, you have to wonder if Bran will punish Jaime on Game of Thrones.

Jaime did, after all, push a young Bran out of a tower window after which he plummeted to his death, and all for witnessing Cersei and Jaime getting it on in an old storage room. I mean, the poor kid probably didn't even know what he had stumbled upon when he saw the queen bent over in front of her brother. OK, maybe he had a few guesses, but it was still a shocking turn of events.

Afterward, Bran lay in a coma for a while before he woke up with no memory of what had happened and without the use of his legs. Jaime and Cersei could rest easy knowing that their incestuous secret was still just that, but it didn't stop Catelyn from wanting to seek revenge on who pushed her son and afterward, who hired someone to come to his room and try to stab him to death. Even after all of that, though, I don't think Bran will be coming for Jaime's head. He's the Three-Eyed Raven now, which means that he's more woke than anyone. And getting revenge on Jaime probably isn't even on his radar.

Toward the end of last week's episode, Jaime told Sam that he was waiting for "an old friend" in the Winterfell courtyard. It wasn't until the end of the episode, when Jaime and Bran came face to face for the first time in seven seasons, that it was clear which "friend" Bran had referred to. That alone should tell viewers that Bran does not hold any ill will toward the man who paralyzed him.

Being the Three-Eyed Raven means that Bran is no longer the same boy he was when he lived at Winterfell years ago. He still has the memories of being that person, but now he has sort of evolved into his telepathic being who can warg into animals and see the past, present, and future through visions. My best bet would be that Bran now sees that without Jaime injuring him years ago, he would have never gone on his journey to become who he was meant to be.

From the looks of the preview for Episode 2, Jaime will, however, have to answer for the death of the Mad King, Daenerys’ father. Jaime got that adorable nickname of Kingslayer by killing the king and Daenerys might not be happy about him showing his face in Winterfell.

Entertainment Weekly recently released a set of photos from the upcoming Game of Thrones episode and one shows Bran at the Weirwood tree, likely in the throes of another vision. This could mean he is going to have a vision of the incident that led to Jaime killing the Mad King. It could be that Jaime truly had no choice but to commit the act of treason and if Bran has proof to back this up, then Daenerys will have to let it go.

I highly doubt that Jaime traveled months on horseback just to be executed as soon as he arrived in the north. Maybe he will have to explain his actions, but there are a few people who will be able to speak on his behalf. Like Brienne, who has pledged herself to the starks, but has a special place in her heart for Jaime. And Tyrion might speak up for his brother if it means saving his life.

Jaime might end up as a casualty in the war against the dead or the war against Cersei, but I have a feeling he will be given a hero's send-off. He has evolved more than almost any other character since Season 1 and he deserves recognition for that.