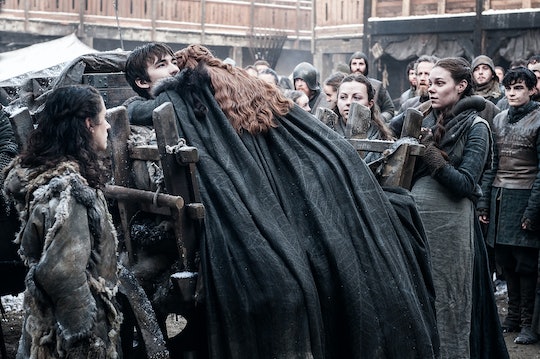 One of the many reunions we've been looking forward to on Game of Thrones Season 7 happened in Episode 3, "The Queen's Justice." Slowly, the surviving Stark children are beginning to find their way back to Winterfell, now that Jon Snow has successfully retaken the castle as King in the North. Sansa has taken over as interim ruler while Jon links up with Daenerys at Dragonstone, when who should appear at the gates but her long lost little brother Bran? So will Bran tell Jon he's a Targaryen on Game of Thrones? Of all the things Bran has learned in his time away, explaining his powers isn't one of them.

Although Sansa was excited that her brother is back because it means he's the rightful Lord of Winterfell, Bran explained that he can't be lord of anything since he's too busy being the three-eyed raven. She doesn't understand and he simply shrugged her off, saying it's difficult to explain. But among the myriad of things Brandon Stark isn't even attempting to explain is that he has the power to see everything that's ever happened, everything that is currently happening, and, possibly, everything that will happen. That means that he knows Jon Snow's true parentage, and that they aren't half-siblings at all, but rather cousins.

Up until last season, we believed that Jon Snow was Ned Stark's bastard son whom he took in and raised at Winterfell alongside his own children. But then, in a flashback Bran had as the three-eyed raven, we learned that Jon's real parents are Ned's sister Lyanna Stark and Rhaegar Targaryen. That makes him Daenerys' nephew, but also — if you're of the mind that the Iron Throne still belongs to Targaryens — the rightful heir to the throne. (Rhaegar was Mad King Aerys' eldest son, and therefore, his heir. Jon is Rhaegar's only surviving son, and thus, his heir.)

Of course, Jon Snow barely wants to be King in the North, let alone King of the Seven Kingdoms, so he probably isn't going to fight for the throne. What he is interested in is finding a way to defeat the Night King, the White Walkers, and their growing army of wights before they kill every living person and zombify the realm. If Bran reveals to him that he's a Targaryen, it may endear Jon and Daenerys to each other long enough for them to really join forces and complete Melisandre's ice and fire prophecy. But like a true three-eyed raven, Bran seems in no rush to share vital information. And with Jon at Dragonstone and Bran at Winterfell, we may be waiting awhile for this particular bomb to drop.