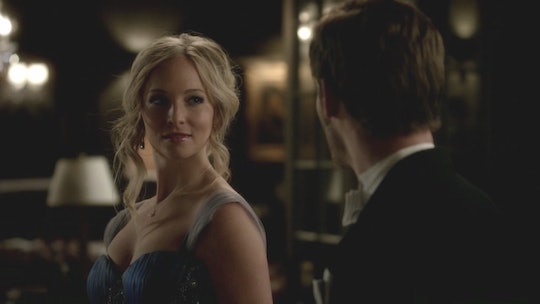 The Vampire Diaries ended with an incredibly emotional series finale on March 10. But despite the fact that the last episode had a definitive sense of finality (with a shocking character death and even time-jumps into the afterlife), many fans are finding it hard to let go and say a permanent goodbye. After all, they've grown with these characters and gotten attached over the show's eight-season run. With the show's spin-off The Originals still on the air, there's always a chance for certain characters to migrate over to that series. But will Caroline appear on The Originals? The Mystic Falls vampire is favorited by fans to make the transition over to New Orleans.

If you think about it, it would make perfect sense for Caroline (out of any of the remaining TVD characters) to show up and infiltrate the Mikaelson clan. Her storyline was left the most open-ended. Viewers saw a human Bonnie find peace with Enzo's death and decide to travel the world in his memory. We also saw Damon and Elena living a long, human life together, eventually dying and finding their peace with their deceased family members in the afterlife. Alaric and Matt, too, ended the series the way they began: as humans. Caroline, on the other hand, was the show's sole remaining vampire. In that sense, her story is endless, because she'll be living for a long, long time (possibly forever).

There's also no denying that the writers set up Caroline perfectly for an eventual appearance on The Originals. Her very last scene on TVD found her opening up a school of magically gifted children and receiving a check from Klaus Mikaelson at some undisclosed point in the future. In a voiceover, Alaric even called the opening of the school/Caroline receiving Klaus' letter "the beginning of another story" — which certainly seems to imply that it's a story that will (at some point, hopefully) get told.

Luckily, the showrunners seem to be on the same wavelength as fans, in the sense that they're totally open to having any characters from TVD make the jump over to The Originals at some point in the future.

The show has already filmed The Originals Season 4, so it's unlikely that anyone (besides Matt Davis, who was already confirmed to appear as Alaric on an episode this year) will crossover this season. Showrunner Julie Plec also confirmed to The Hollywood Reporter in a series finale postmortem that Klaus and Caroline will not come face-to-face on The Originals this season.

But if The Originals gets renewed for a fifth season (or beyond), Plec is up to write in TVD characters — if those actors are willing to reprise their roles. "I think probably everybody involved with The Vampire Diaries needs a nice, long break from being a vampire or witch, werewolf, etc," Plec told Variety. "And if, when they come out the other side of that hiatus, they want to show up in The Originals' sandbox, they are all absolutely welcome with open arms."

While they're not making any promises, it certainly seems hopeful that we could see Candice King make an appearance at some point down the line. In the meantime, though, I'm preemptively crossing my fingers for a hasty The Originals Season 5 renewal announcement.