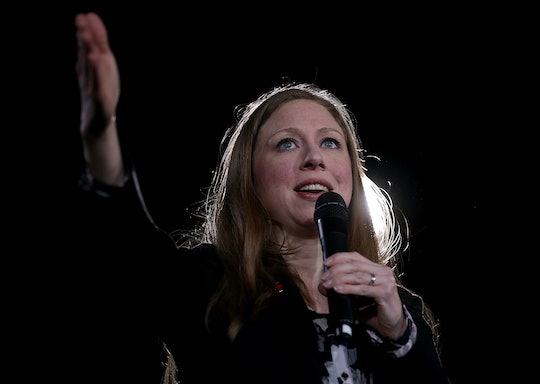 Will Chelsea Clinton Speak At The DNC? She'll Headline The Final Night

As one national convention wraps up with a drawn out and lengthy speech, the other gears up for its own four-day rally. At the Republican National Convention, Donald Trump's children gave arguably the most rousing endorsements. At this upcoming Democratic National Convention, speeches from Hillary Clinton's family are likely to hold equal — if not greater — significance. Clinton's schedule of high-profile speakers, though, makes a speaker slot hard to come by. First Lady Michelle Obama and President Barack Obama are scheduled to give their thoughts on the first and third nights, respectively. Vice President Joe Biden will speak on night three as well, and former president Bill Clinton will headline night two. Additionally, the DNC schedule includes former democratic presidential nominees alongside key democratic political figures, social activists, and some celebrities. Amidst this crowded schedule, will Chelsea Clinton speak at the DNC?

Similar to how Trump's daughter Ivanka introduced him on the final night of the convention, Chelsea will give the speech before her mother's long-anticipated address. Though it's definitely an honor to be considered her mother's right-hand-woman, it's also not a huge surprise. Chelsea began campaigning on her mother's behalf as far back as 2008, when she was only a teenager. Chelsea joined this iteration of her mother's political career this past January. She's emphasized issues that pertain to mothers in particular, seeing as she just had a baby of her own, Aidan Clinton Mezvinsky, this June.

Chelsea currently works as vice chair of the Clinton Foundation, her parents' NGO that strives to "improve global health and wellness, increase opportunity for girls and women, reduce childhood obesity, create economic opportunity and growth, and help communities address the effects of climate change," according to its website. It's possible that her DNC speech will nod to the gender, climate, and healthcare issues that she continuously advocates for.

The final night of speaking at the DNC is entitled "Stronger Together," a sentiment that definitely holds steadfast where Chelsea and her mother are concerned. A DNC statement notes that Hillary Clinton's speech will be "about her vision for the country — her belief that we are stronger together and that America is at its best when we work together to solve our problems."

Chelsea continuously goes to bat on her mother's behalf. As the RNC came to a close, Chelsea sent a memo to supporters criticizing the RNC's "attack after attack," specifically citing all the name-calling. She wrote that her mother is "smart, she's strong, and she never forgets who she is fighting for and why," language that we're likely to hear again next Thursday night.