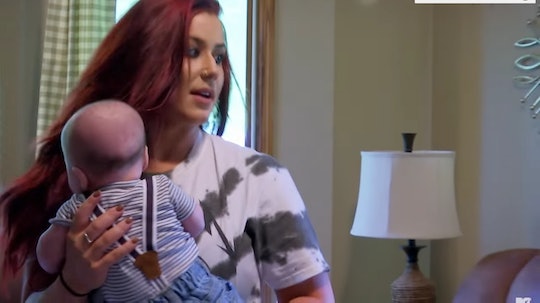 Chelsea Houska's Baby Girl Is Officially Here! So, Will Her Birth Be On 'Teen Mom 2'?

Many congratulations are in order! On Aug. 29, Teen Mom 2 star Chelsea Houska announced she gave birth to a beautiful baby girl. It's definitely an extremely happy day for the family and fans are thrilled. Many fans can't help but wonder, given Houska's role on the MTV reality series, will her birth make it onto Teen Mom 2?

Teen Mom 2 premiered on Jan. 11, 2011, and follows the lives of four girls from the second season of 16 and Pregnant. The show allows fans to catch up with the new moms and follow them as they navigate their first years of motherhood.

Houska has been a member of the cast since the show premiered, which means fans have spent years watching as she and her family grew. Houska is currently married to Cole DeBoer. The couple legally married in 2016, according to E! News, and this is their second child together, Houska's third. Houska is also mom to 8-year-old daughter Aubree, from a previous relationship, according to People, and their son Watson Cole, born in January 2017.

In the past, Teen Mom 2 has aired births, but will Houska's get featured on the show? The answer is actually kind of unclear.

Houska's husband, Cole Deboer, announced the arrival (and name) of the couple's new baby girl in a post on Instagram. The picture shows their newest arrival lying in a hospital bassinet with an adorable cap on. DeBoer wrote:

That's right — today happens to be Chelsea Houska's 27th birthday. Giving birth may not be what people immediately think of for their birthday plans, but imagine how cute it is to share a birthday with your daughter.

"My mom and I share a birthday of June 24th as well! How awesome?!" one fan commented.

Some users wished happy birthday to both baby Layne and Houska. One commented, "Happy Birthday Chelsea and Happy Birthday to the new baby girl! She's absolutely perfect and beautiful just like her momma and Big sis!"

And one fan noted, "She looks just like Watson!"

Take a look at baby Layne's brother below! There's definitely a family resemblance going on!

As mentioned before, Teen Moms 2 has aired stars' births on the show. However, it's hard to say for certain if Houska's recent birth will appear. The show wrapped up its eighth season recently and that means they won't be airing any new episodes until Season 9 premieres.

It's definitely possible that the Season 9 premiere, or even later episodes, could include a montage or nice moment dedicated to baby Layne. However, there's been no confirmation or word about it from Houska herself. Considering she just gave birth, it's unlikely that any type of announcement will be coming anytime soon.

In fact, on Aug. 22, Houska even tweeted, in response to a fan asking if she was in labor at the time, "I can promise everyone that whenever I AM in labor...nobody will know..and there def won’t be posts and silly little articles about it."

It seems Houska will most likely keep her birth to herself, although can anybody blame her? The process of giving birth and bringing a child into the world is intense and intimate, so it makes perfect sense that she may not want to share that part of the experience with a wide audience.

Both Houska and her husband are pretty active on social media, though, so fans can keep up with Layne updates really easily. And they can still look forward to watching her grow!