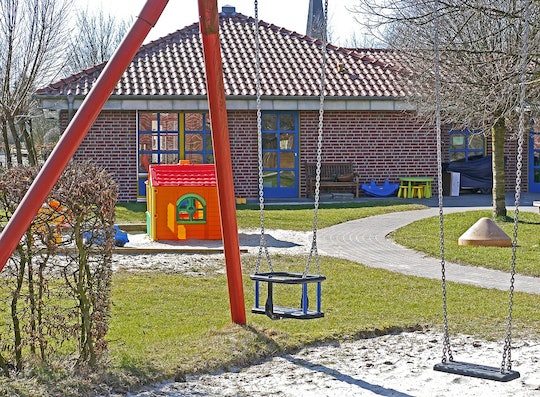 Will Child Care Get More Expensive Under Trump? Only Certain Families Will Get Help

Every working parent knows about child care woes. Not only can it be an emotional punch to the babymaker, it can also be a huge financial drain. During the 2016 general election, both Democratic nominee Hillary Clinton and GOP nominee Donald Trump laid out child care plans. As the new president-elect, how does Trump's child care plan hold up? Will parents be forking over more money, or will the Trump administration manage to lighten the load for working families?

In his child care proposal, Trump presented a plan that would enable six weeks of partially paid mandated maternity leave (he proposed the government would rework the unemployment insurance program to offer new mothers up to $300 per week). While it wasn't as comprehensive as Clinton's plan of 12 weeks parental leave, it was something. A reason for parents to be cautiously optimistic. But let's get real for a moment here; six weeks immediately postpartum is barely a drop in the parenting bucket. What is Trump offering parents who are going to have to find childcare for their children after those six weeks are up? Well, if parents are making enough money to benefit from tax breaks, the news is pretty good. For families earning $62,400 (or $31,200 for single household families), Trump plans to offer a child care rebate under the Earned Income Tax Credit.

Essentially parents will have the opportunity to deduct child care costs from their tax bills. Trump also proposed an above-the-line deduction of up to $5,000 for the care of children under the age of 13 years old. Families earning more than $250,000 per year do not benefit from this program. Families could also start a Dependent Care Savings Account, contributing up to the maximum yearly amount of $2,000. Trump proposes to help lower-income families by providing a 50 percent match up of up to $1,000 per year. During a September speech on the campaign trail, Trump said:

For many families, child care is now the single largest expense, even more so than housing. Yet very little policy work has been done in this area.

So will Trump's child care policy save parents money if implemented when he takes office in 2017? Yes, and no.

While the benefits are structured to help middle-income families, lower-income families would see very little change. According to Elaine Maag, a senior research associate at the Tax Policy Center:

The plan tilts benefits toward high income families, rather than low income.

Trump has said he hopes to create a child care tax credit to help lower-income families of up to $1,200 per household. This tax credit would be added on to the existing Child and Dependent Care Tax Credit. A lower-income family with one child would be eligible for around $150 per year under Trump's tax proposal, which really isn't much, at the end of the day.

Still, Trump's child care plan is perhaps one of his most detailed proposals to date. Whether or not the proposal gets through a Republican-controlled Congress is another story altogether, unfortunately.