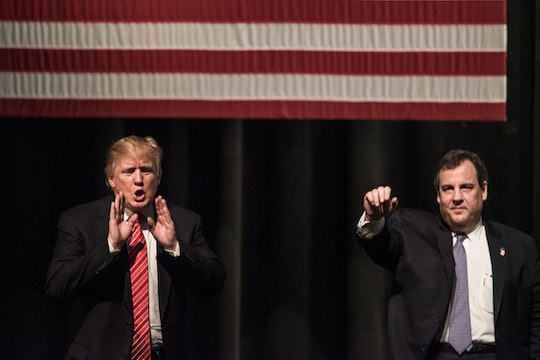 Since endorsing Home Alone 2 actor Donald Trump in February, New Jersey Gov. Chris Christie has been called a lot of things: a manservant, an unpaid intern, a hostage. But one thing he's never been called is a running mate. However, he's reportedly gaining power within the Trump campaign, and some are speculating that Chris Christie might be Trump's vice president. His current position as the head of Trump's transition team might be a an indicator; NJ.com reported that the last Republican to fill that position, Dick Cheney, did indeed go on to serve as VP.

Being tasked with choosing Trump's potential future cabinet is certainly a high-profile position, and infinitely more powerful than fetching Trump's McDonald's orders or standing around looking completely terrified while Trump speaks. But one wonders if Trump even respects Christie enough to offer him the job. The New York Times noted that Christie, known for referring to other elected officials by their first names, called The Donald "Mr. Trump" when he endorsed his "friend" in February, and we all remember Trump's awkward Oreo joke that was supposed to be a swipe at Nabisco, but instead had the unfortunate result of sounding like an order for the governor to go on a diet.

Christie frequently appears on lists speculating about Trump's future running mate, and the Times pointed out that he's "one of the few major figures in the Republican establishment to align himself entirely with Mr. Trump’s candidacy." That is; he might be the only person who's actually interested in the job. While many old guard Republicans staunchly refuse to endorse Trump, and others do so only conditionally or begrudgingly (cough, cough, House Speaker Paul Ryan), Christie's firmly on board the Trump train, which certainly gained him a position of favor.

But does a Trump alliance make Christie look any better in the eyes of the public? His decision to back Trump, a candidate who he once opposed on so many issues, has caused some to label the governor a flip-flopper, which of course is the worst thing a politician could be called. And according to a Quinnipiac University poll (via ABC News), 72 percent of voters in the governor's home state of New Jersey don't approve of Christie as Trump's running mate (64 percent of them disapprove of him in his current position, as well). Could a Christie pairing cause Trump to lose support? More importantly, is Trump even considering that? He seems to prize Christie for his loyalty above all else, but a VP pick should be about diversity and bridge building. And we all know how bad Christie is with bridges. With the Republican National Convention just a couple of weeks away, we'll find out his choice soon enough.