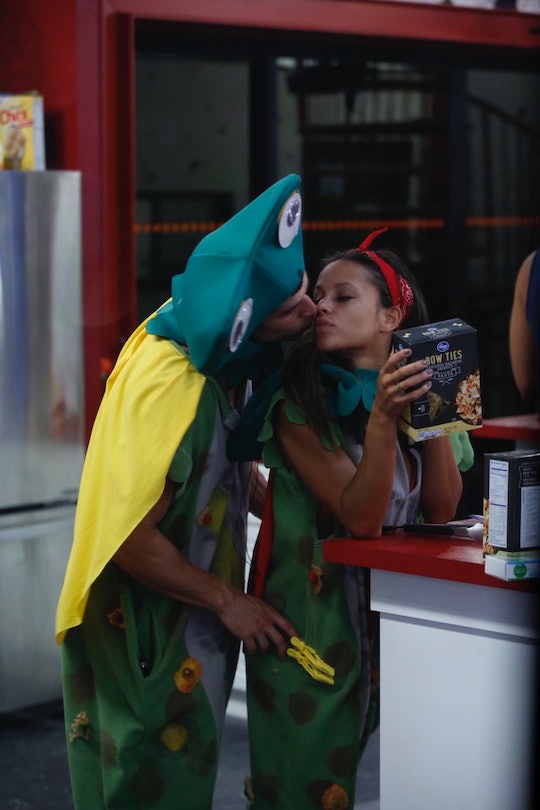 Will The 'Big Brother 19' Finale Include A Proposal?

The winner of Big Brother 19 is about to be crowned, but many fans believe something even more monumental will happen. Rumors of a proposal for one of this season's showmances has been floating around for a while now, but nothing has been confirmed. So will Cody and Jessica get engaged on Big Brother 19 or are their fans just being extra hopeful about where their relationship is headed?

Well, fans certainly have good reason to suspect the duo may be getting engaged. When Cody was evicted for the second time, right after his love interest was evicted the week before, he said that he will marry Jessica one day. In response, Jess, who was evicted right before jury began, tweeted the hashtage "#finalenight," with a wink face emoji. The tweet seemed to imply that a marriage proposal will happen that night, however it's also very possible she was just trolling fans.

Unless Jessica is going to propose to Cody, there's no way for her to know Cody's planning on proposing to her finale night. It's possible they discussed it while they were both still in the house but with dedicated fans watching the live feeds religiously, it'd be surprising if they were able to have that discussion without fans catching wind of it. However, it's not impossible.

There are many times when the feeds cut and some things in the house do get missed. If that's the case, kudos to Jessica and Cody for being able to pull that off. However, if the pair is actually planning to get engaged on finale night, one has to wonder if it's actually a legit proposal.

Jody getting engaged would certainly overshadow whoever wins the competition, and at this point it seems very likely that winner will be Paul. It's clear there's no love lost between Jody and Paul, so it'd be a great act of revenge for Jess and Cody to purposefully get engaged the same night Paul finally won Big Brother.

Many fans, and some past Big Brother competitors, are seriously rooting for a proposal, but despite what Cody told host Julie Chen, it just seems unlikely. Especially since soon after Cody said he would marry Jessica, he backtracked, claiming Julie caught him off guard and he actually "blacked out" during that moment. He therefore seemed to imply he didn't mean it. That's not to say he's still not madly in love with Jess, but since he did only just meet her a few months ago, he's probably not ready to make that level of a commitment.

Whether or not the evening ends with Jess getting a ring, it's clear these two are just as in love with each other as ever. Jessica has been preparing for the arrival of her "boyfriend" and is obviously excited the season is finally almost over so they can be reunited. Although Cody hasn't chatted much about Jess, there's no doubt he's ready for this whole thing to be over.

"No, I don't enjoy my time in the Jury House," he said during the recent jury house segment on the show. It's nice to see Cody is still just as blunt and honest as ever.

Besides the show finally being over, Jody fans are also hoping to see Jess or Cody win America's Favorite Houseguest and the $25,000 prize that goes along with it. Jess has been urging her fans not to split the votes and to give Cody all their votes so he can win. It appears she's still choosing love over money. Whatever works for you, Jess.

It'll be interesting to see if their plan works, but honestly none of the other houseguests seem to be nearly as loved as Jess and Cody so it'd be surprising if one of them didn't win. You can find out who wins AFH and the grand prize Wednesday night at 8 p.m. EST on CBS.