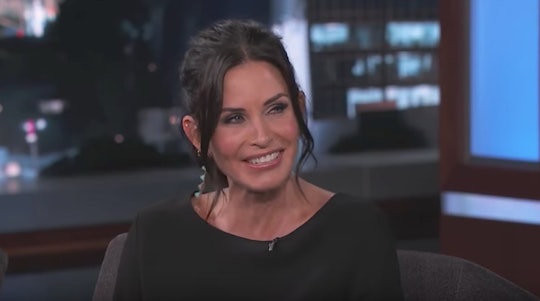 Will Courteney Cox Have Another Baby?

Courteney Cox has always been a candid celebrity. Whether it's discussing her divorce from David Arquette in 2013 or her experiences mothering their 13-year-old daughter Coco, Cox has never shied away from exposing personal details about her life and family. Now that Cox is happily engaged to fiancé Johnny McDaid, she's ready to reveal the next chapter of their lives together, which includes the possibility of expanding their family. So, Will Courteney Cox have another baby?

If you're a fan of Cox, then you know she's wildly obsessed and in love with Coco. Cox regularly gushes about Coco in interviews and the two are often spotted out in Los Angeles enjoying quality time together. Considering Cox is an incredible mom with a lot of love to give, it's not far off to assume she'd want to have another child. In an interview with People Magazine, Cox confirmed her desires for another baby and discussed how she'd bring this dream to fruition considering she's 53 years old.

I would love to have a baby now. I would. I know it’s crazy, but I would.

As for the logistics of Cox's baby making plan, she said:

I mean, I could carry someone else’s egg. I may be one of the older people doing it, but I would love to, with Johnny that is.

If Cox does choose to use an egg donor for her next child, she'll be just one of many women that have gone this route. According to the U.S. Centers for Disease Control and Prevention, about 16,000 cases of in vitro fertilization involve egg donations. For women who are healthy enough to carry a baby but lack viable eggs, donor-egg IVF is a desirable option due to its high success rates. According to U.S. Centers for Disease Control and Prevention's report, donor-egg IVF has a 55 percent success rate nationally.

As for the cost of donor-egg IVF, the process can run anywhere "between $25,000 and $30,000 for just one cycle," according to Modern Family Surrogacy. Considering Cox's net worth is $75 million, the costs associated with donor-egg IVF likely won't be a problem. Not to mention McDaid has his own sizable net worth of $5 million, according to Celebrity Net Worth. Luckily for Cox and McDaid, they have the financial resources to conceive using a donor egg.

Donor-egg IVF aside, this is an incredibly exciting time for Cox and McDaid, especially since 40-year-old McDaid has yet to be a dad. Cox has repeatedly expressed her love for McDaid in past interviews, so it's no shock she'd want to co-parent. As to whether or not Cox and McDaid will attempt egg-donor IVF in the future, this remains to be seen. If Cox does end up getting pregnant with McDaid, it's safe to say they'll have a lovely family.