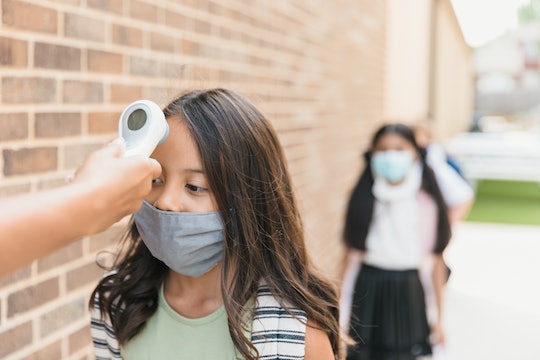 Will COVID-19 Be A Pre-Existing Condition? Here's What The Experts Predict

Millions of Americans have been infected by coronavirus, and those who have recovered from the devastating illness might not be out of the woods yet. In addition to symptoms that sometimes persist for months, the future of their health insurance coverage could be in jeopardy. If the Supreme Court overturns the Affordable Care Act (ACA) — and with it the federal protections for pre-existing conditions — health policy experts, pundits, and political candidates worry that it’s only a matter of time before COVID-19 becomes a pre-existing condition.

"If you have a preexisting condition, heart disease, diabetes, breast cancer, they're coming for you," Vice Presidential candidate Kamala Harris said at the VP debate. Experts believe that based on precedence, COVID-19 will most likely be added to Harris’ list, according to Politifact. Citing remarks from six health care policy experts, Politifact sources agreed that “insurers don’t like uncertainty, and the virus’s possible long-term effects aren’t fully known, which increases the likelihood that it would be considered a pre-existing condition.”

Before the Obama Administration passed the Affordable Care Act (ACA), having a pre-existing condition meant insurers could discriminate against patients for things like diabetes or even pregnancy in some states.

Now that the constitutionality of the ACA is being questioned again, health experts believe insurance coverage for the 7.6 million Americans who, according to the New York Times data, have been infected with the coronavirus could also be threatened.

“If you’re going to invalidate the Affordable Care Act, that would mean that the long-term effects of Covid-19 would become a pre-existing condition,” Democractic health policy expert Chris Jennings told the New York Times.

Other health policy experts agree. “There is a real concern that if those preexisting condition protections are overruled or taken down by the Supreme Court, people who have COVID-19 could be medically underwritten, charged more or be denied a policy,” Sabrina Corlette, co-director of the Center on Health Insurance Reforms at Georgetown University told Kaiser Family Foundation, a nonprofit health policy organization. She added, “Insurance companies have an obligation to shareholders, and that obligation is to maximize profits. They don’t do that by covering a lot of sick people when competitors are not doing it.”

Jen Mishory, a senior fellow at the Century Foundation, a progressive independent think tank, paints a chilling picture of the future should the protections be upended, writing that pre-ACA policies toward pre-existing condition practices were “draconian.” “If they existed today, it would mean the over 1.5 million current COVID-19 patients, and the tens of millions more who may test positive or be at risk for contracting COVID-19 going forward, would face significant discrimination.”

Should federal protections be removed as these health experts predict, it will be up to individual insurers to determine how to treat Covid-19. “Presumably, if there were no protections in place anymore, insurers could simply ask consumers, have you ever tested positive for COVID-19?" Eric Gascho, Vice President, Policy and Government Affairs for the National Health Council told NBC. "Or they could ask, do you have any lung or heart damage or other health issues as a result of COVID-19?”

All that said, it's important to remember that we don’t know what the Supreme Court will decide. What we do know is both Democrats and Republicans have said they support some form of protections for those with pre-existing conditions. And, as recently as late September, President Trump signed an Executive Order saying as much with his “America First Healthcare Plan.” The administration's Health and Human Services Secretary Alex Azar told reporters the order ensures Americans with pre-existing conditions retain healthcare coverage, according to Reuters. However, that outlet also reported that lawyers were skeptical of the action with one saying that the President's "statements have no more legal weight than a tweet.”

As for the insurance companies themselves? Romper reached out to five major health insurance companies for this story. Only Cigna and Blue Cross Blue Shield responded by the time of publication. When asked via email if COVID-19 would be deemed a pre-existing condition, a Cigna spokesperson there said, "We don’t believe it will. Since the start of the pandemic, Cigna has been committed to ensuring our customers have access to COVID-19 testing and treatment. Regardless of what the Supreme Court decides, or how COVID is eventually classified, we will continue to make sure our customers have access to simple, affordable, and predictable care.”

As for Blue Cross Blue Shield, Justine Handelman, Senior Vice President, Office of Policy and Representation, said this on behalf of the company: “Blue Cross and Blue Shield (BCBS) companies believe everyone should have access to care and provides coverage no matter who you are, where you live or what your health condition may be. We support the Affordable Care Act, and strongly support its requirement that people with pre-existing health conditions are guaranteed coverage.”