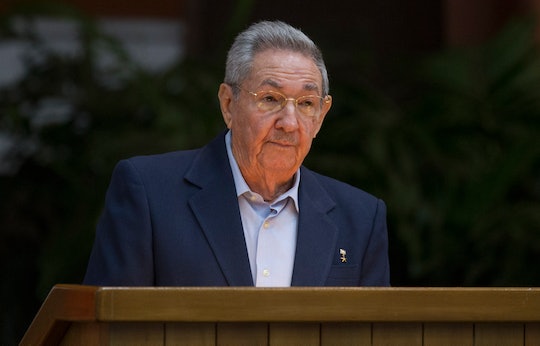 Cuban dictator Fidel Castro's death on Friday evening had a serious impact on those living in Cuba and of Cuban descent. But will Cuba stay communist after Fidel Castro's death? More than likely, under current rule, Cuba will stay communist, and it's unclear whether that will change in the future. Aside from Queen Elizabeth II in England, there had never been a longer living ruler than Fidel Castro, who overthrew the Cuban government in 1959. Since becoming the President of Cuba in 1976, Fidel worked to maintain Cuba as a communist country, which has since effected the country forever — and ensured that his successor would do the same.

Raúl Castro has been the President of Cuba since 2008, when Fidel became ill and handed over the reigns to his younger brother. In the past eight years, according to USA Today, Raúl has worked with other nations, such as the United States (unlike his brother), in order to "maintain control of Cuba's military, economy, and tightly controlled social order." It is this tightly controlled order that maintains communism in Cuba. Although many suspected, according to USA Today, that "more freedom" would be brought to Cuba after it severed ties with the United States, not much has changed within the years that Raúl has taken over.

In April, eight months before his death, Fidel made his final address the the Cuban people, letting them know that communism in Cuba would prevail, and "urged people to fulfill his communist vision," according to The New York Times:

Soon I will be 90...our time comes to us all, but the ideas of Cuban communism will endure.

Just because Raúl is not his brother, does not mean that they think any different — according to The Miami Herald, Raúl was the "first of the brothers to study Communist dogma and the first to visit communist Europe." Just seven months ago, Raúl denounced the United States democratic system. Not only is Raúl the president of Cuba, according to USA Today, Raúl is also the first secretary of the communist and the head of Cuba's military. According to The Miami Herald, Raúl is "harsher than Fidel on the political and security sides, but more pragmatic on the economic side and more likely to seek better relations with Washington." Because of this control that he has, especially within the communist party, it is unlikely that Cuba will immediately change after Fidel Castro's death.

But there could be change coming — give or take a few years. Raúl announced that he would retire from presidency in 2018. With both Castro brothers out of presidency, a new ruler would take over for Cuba. However, despite there being an heir-apparent to the presidency in Cuba, according to The Miami Herald, succession isn't always assured. And according to USA Today, higher officials have an interest in "maintaining the status quo" of Cuba. Just because Raúl will step down from presidency does not mean that he will abandon his other positions of higher power, either.

It seems, for now, Cuba will remain a communist country.