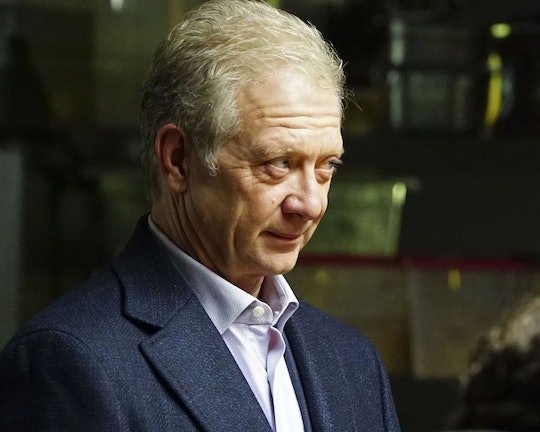 Will Cyrus Lose His Daughter On 'Scandal'? He's Been Pretty Neglectful Lately

It's safe to say that Cyrus did not learn much from being fired from the White House last season on Scandal. He's still up to scheming pretty horrible things, both for professional and personal reasons. Professionally, he was responsible for a fake-turned-real hostage situation earlier this season — among other things. Personally, he's cheating on his husband, Michael. Granted, Michael is his former prostitute and current "fake" husband, but cheating on him is still pretty awful. At the end of Thursday's episode, "Buckle Up," Michael left their home — and took their daughter with them. Will Cyrus lose his daughter on Scandal?

Let's backtrack to why Michael left, because this definitely was not a spur of the moment decision. Cyrus has been cheating on him with Tom — yes, the same secret service agent Tom that went rogue and murdered Fitz's son some seasons back. Tom is also Cyrus' partner in crime when it comes to planning events like the hostage crisis; they'll do whatever it takes to get what Cyrus wants. Currently, Cyrus' goal is to get Francisco Vargas into office.

This leads into how Michael found out about Tom. Vargas' brother and fellow campaigner, Alex, is trying to get information from Michael about Cyrus. In exchange, he told Michael about Tom. At first, Michael did not believe him — but as Cyrus started coming home later and later and refused to disclose where he's been, Michael started to believe it.

The situation came to a head on Thursday's episode. Michael confronted Cyrus about cheating. Cyrus was his typical rude and insensitive self, and when Michael says he puts his effort into raising their daughter, Cyrus corrected him: she's James' (his late husband's) daughter. He then threatened to kick Michael out.

Not only did this prompt to give Alex the dirt on Cyrus, which will inevitably surface in later episodes, he decided to leave on his own – and take their daughter, Ella. Will Michel and Ella return? Cyrus does not have many redeeming qualities at this point. Furthermore, he does not seem to care much about Ella besides her relation to his late husband.

Of course, Michael does not make much of a living on his own. Unless he changes careers or lives with family, he does not have much choice but to move back. It will be interesting to see if Cyrus puts some of his energy into getting Michael and Ella back, or if he will continue to only care about the election. Knowing Cyrus, the latter is more likely.