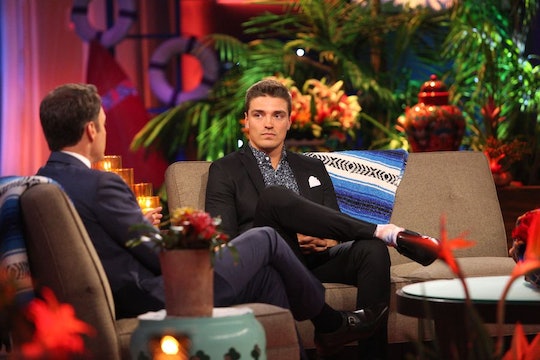 The fall from grace for Dean Unglert of The Bachelorette and Bachelor in Paradise was so hard you could basically hear the reverberations on Twitter from coast to coast. His transformation to bona fide Bachelor villain was complete when he strung Kristina along on Paradise until she finally had enough. But is their story really over? Will Dean and Kristina get back together after Bachelor in Paradise? He recently hinted that there's a chance their relationship could be rekindled.

Back in the first episode of Bachelor in Paradise, Bachelor Nation still loved Dean. He was the adorably puppy-obsessed and puppy-resembling dude with articulate social media posts and who had his heart broken after hometown dates during Rachel Lindsay's season. So naturally everyone was thrilled when he immediately connected with Kristina — a favorite from Nick Viall's season of The Bachelor, who we now know is clearly too mature for this show. It felt like a match made in paradise.

But then Dean started to string Kristina along as he simultaneously went after Danielle L. In a matter of days, Dean went from being everybody's favorite human to generally vilified. How could he do this to our darling Kristina? Anyone who's been on the receiving end of this kind of nonsense immediately felt for Kristina.

For what it's worth, Dean seems to be at least somewhat aware these days that he was totally in the wrong here, and even appears to want to get back with Kristina. He recently posted an Instagram picture of himself and Kristina with the caption, "You were out of my league," (to which all of Bachelor Nation responded — "um, yeah!"). Dean also told Us Weekly that the two had started talking again. "Kristina’s great. You know, her and I had to sit down and talk to each other and hopefully there’s a time that we can figure it out and see what happens from there," he stated. "But we’re just for now casually talking and seeing if there’s anything there."

Now, I've defended Dean for a really long time (both in my head and in these posts.) But you know what, sometimes you have to know when to call it. Clearly, I do not know the particulars of Dean and Kristina's relationship and whether they're considering giving their relationship a second shot. But from my very, very far outside perspective, it just seems like a really bad idea. In either case, good luck to both of them.