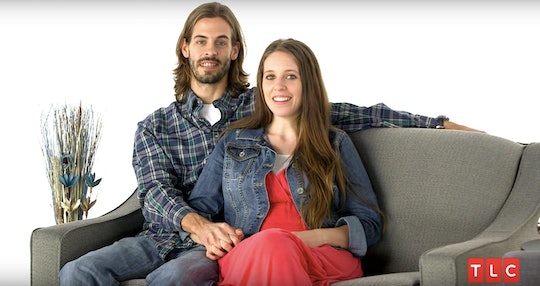 It's no secret that the Duggar family (in-laws and spouses included) operate on a pretty strict religious platform. Unfortunately, one cast member spouted his hateful ideologies on a 17-year-old, fellow TLC reality show star. So, given how it all went down, will Derick Dillard be on Counting On next season? How about this current one? The nature of his personal attack on I Am Jazz's star Jazz Jennings really gave the network no choice but to pick a side.

Following Dillard's Twitter rant targeted at Jennings last Thursday, TLC issued a tweeted out a statement it has not been associated with the 28-year-old reality star recently and will not associate with him in the future. The statement reads:

We want to let our viewers know that Derick Dillard has not participated in Counting On for months and has no plans to feature him in the future. We want to reiterate that Derick's personal statements do not reflect the views on the network. TLC is proud to share the story of Jazz Jennings and her family and will continue to do so.

This decision was made public after Dillard posted a series of tweets about the about transgender reality star. "I pity Jazz, 4 those who take advantage of him in order 2 promote their agenda, including the parents who allow these kinds of decisions 2 be made by a child," he wrote in one tweet, misgendering Jennings. "It’s sad that ppl would use a juvenile this way. Again, nothing against him, just unfortunate what’s on tv these days."

But he didn't stop there. Jill Duggar's husband attempted to defend himself further, writing: "Never bullied anyone, just said I didn’t agree with what is being propagated on tv. I’m expressing my view of what should be treated as reality; if I say I feel like I am Nepali, that doesn’t make me so." Dillard seemingly rejects the concept of being transgender altogether, and criticizes "what is being propagated on TV."

"Also, has anyone looked into whether a child is capable of making that kind of decision," he asked in reference to Jennings' transition from male to female in another tweet. "We can’t vote til we’re 18; our brains aren’t fully developed til around 25."

"Jazz is being taken advantage of," he wrote in another tweet, "as part of a larger agenda. I really have nothing against the kid and wish him all the best in life. I just hate seeing him used this way."

Jennings, who has been open about the extent of bullying and hate that she's suffered in the past, tweeted on Saturday: "In the face of constant ignorance and hatred I prefer to disregard negative opinions and continue moving forward with love." Her fans, naturally, applauded her maturity and rallied behind her.

Just 12 minutes before Jennings response was posted, though, TLC issued its statement.

Though now TLC has made it clear that the networks pretty much wants nothing to do with him anymore, this isn't the first time Dillard has targeted Jennings and her gender identity. In August, he tweeted in protest of I Am Jazz, writing: “What an oxymoron… a ‘reality’ show which follows a non-reality. ‘Transgender’ is a myth. Gender is not fluid; it’s ordained by God."

At the time, TLC stated that his comments don't represent the network's views, but didn't go any further than that, according to Page Six. In response to Dillard, Jennings took the high road once again, writing: "Every day I experience cyber-bullying, but I keep sharing my story. Today was no different."

As per TLC's statement, the father of two likely won't be on Counting On again. But let's be real: there are still plenty of Duggar couples (at least one with a baby on the way) ready to keep the show going.