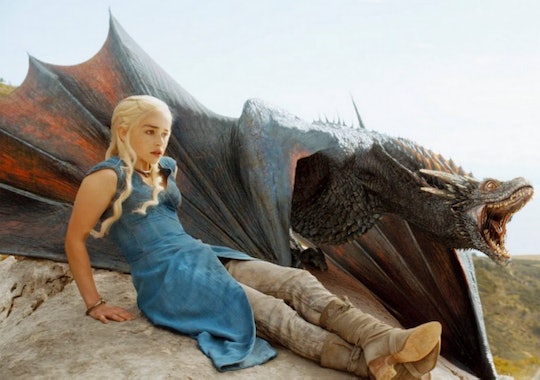 Will Drogon Be In 'Game Of Thrones' Season 6? He's Not Far From Daenerys

The last time we saw Drogon, he was resting on the top of a mountain after getting hit with several fiery arrows and carrying Daenerys off to safety from all of the literal Hell that broke loose in Meereen. (Which was definitely a step up from being one of the people-eating monsters that people were coming to think of Dany's dragons as.) But, as the "main character" of dragons, fans might be wondering where Drogon will be in Game of Thrones Season 6? Will he be dead, after being spent after that all out war in the fighting pits of Meereen that he and Dany ran away from? Or, will he be somewhere burning and eating his dinner of farm children innocently playing on mountainsides? Yeah, hopefully not that one.

Judging by the latest trailer for season 6 of Game of Thrones, Drogon is going to show up bigger than ever — seriously. If Dany's dragons weren't big enough for you in the finale of Game of Thrones Season 5, they're about to double in size yet again. Which should only make sense, since they are dragons and sort of meant to be huge and terrifying creatures. Even to the Mother of Dragons.

Since Dany appears to be led by the Dothraki, as a captive of sorts (because she deserted them maybe?), in the Season 6 trailer, Drogon is close on the tail of the thousands and thousands of warriors who belong to Khal Drogo's clan. It's not clear yet if Drogon is going to open fire and just blast them all into letting Dany go, but most likely not. Instead, though, we should just expect him to be close by the side of the Mother of Dragons.

It's also unclear as to what the Dothraki are going to do with Daenerys. Since they haven't tried to murder her yet, then maybe there is hope that they were rallying around her and are now bringing her back to their home camp to team up with her once again to take the throne. OK, maybe not that simple, especially with that Dothraki guy getting trigger happy with that whip. Regardless, though, if the whole mess with trying to rule a super reluctant Meereen is finally out of the way, the Dothraki can do whatever they want with the former Khaleesi.

In a perfect world, Drogon would swoop down and fling Daenerys onto his back and once again save her from a situation she probably can't get herself out of on her own, but as we all well know, Game of Thrones is nowhere near a perfect world. So, seeing his huge shadow flying above the khalasar as they walk through the Dothraki valley with Dany is likely Drogon keeping a close eye on her to do just that. But, of course, not before we get to see the Dothraki people again. Not that there is much to see without Khal Drogo's presence. In fact, that's still a sore subject for us all.