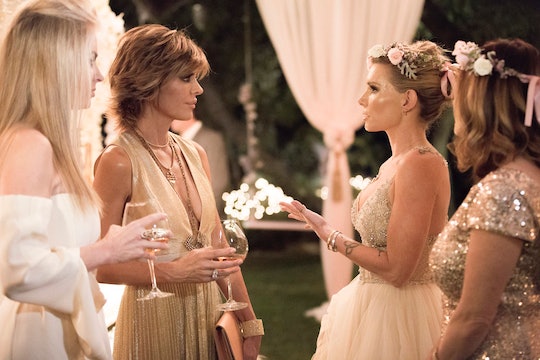 There Could Be More 'RHOBH' In Eden's Future

The only people who get it as bad as the actual housewives themselves on The Real Housewives of Beverly Hills are the friends of the wives. They aren’t core cast members, but they often find themselves in the thick of all of the drama anyway. Eden Sassoon, a newcomer for Season 7, was one of the RHOBH friends who found herself involved with her own drama. So, will Eden Sassoon return to The Real Housewives of Beverly Hills? Although nothing is even official yet, the RHOBH star hasn’t said no to the idea.

The salon owner and heiress of beauty icon Vidal Sassoon made a name for herself on the show when she began to butt heads with Lisa Rinna. During Season 7 of RHOBH, Eden claimed that Lisa had spread drinking rumors about Kyle Richards — someone who is proud of her sobriety — and later, Lisa fired back at Eden. She said that they weren’t even friends and that Eden was instead simply hired to be on the show this past season. Like I said, the drama is everywhere.

According to an interview with WetPaint, though, Eden thought that the friendship that bloomed between her and Lisa was real and she’d felt a "real connection" with the actress in "a bond that lasted a while." She also said that, because of all of the drama that she went through during Season 7 of RHOBH, she can’t see herself just leaving without anything being resolved on camera or put to rest within the show.

The biggest issue Eden had throughout her filming of Season 7 was the friendship with Lisa that began to crumble and eventually just totally fizzle out for the mother of two. But she also said that since filming ended, Lisa reached out to her with some friendly words, so maybe Eden can find her way back to RHOBH if it won’t be a miserable season. Then again, the value in adding more friends of the core cast members is bringing in more drama.

In the Season 7 finale of RHOBH, Eden and Lisa had a huge blowout that didn’t really resolve anything and instead resulted in more insults, curse words, and both woman intent on holding their ground. And since Eden said herself that she would rather not leave the show without any of these issues being solved, if she is asked back, then it’s very probable that Eden will return to RHOBH for Season 8. We'll just have to wait and see.