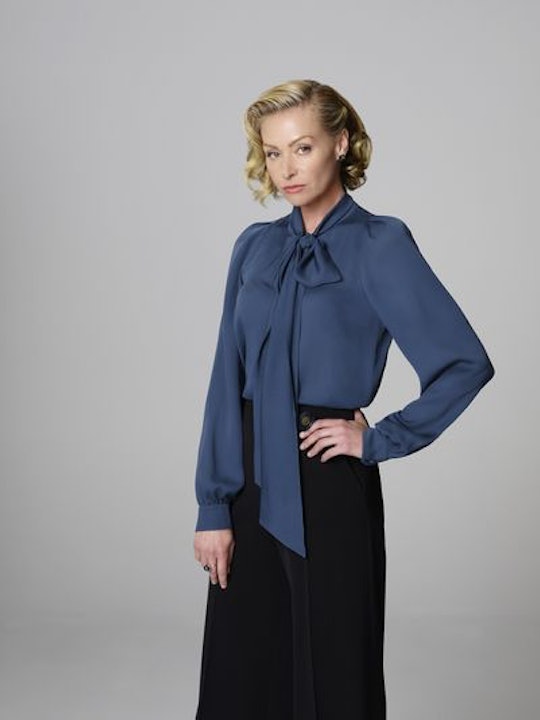 Whoever said that you have to save surprising deaths for season finales? The shock value increases tenfold when it's mid-season, and apparently Scandal executives had that in mind when they wrote in a shocking kill for Season 6, Episode 11. But will Elizabeth North return to Scandal? Portia de Rossi has portrayed an important player for several seasons, but it looks like the death was pretty final.

Since it was de Rossi's decision to leave the show, Liz is definitely dead, with no hope of suddenly waking up on the blood-soaked carpet of Mellie's office, but there's always the off chance that she could return in flashbacks. And we all know how much Shonda Rhimes loves her flashbacks. According to Entertainment Weekly, de Rossi's decision to leave Scandal came about when she started her own business that centers around art curation and publishing and she told the outlet that she figured now would be the best time to really try and pursue her other passion.

"I really just wanted to try something new" de Rossi said. "I’m not saying that I’ll never act again. I might do something in the future, but I really want to see where this can lead, this new business venture. I just want to give it my all."

While that's totally admirable, Liz was killed off on Scandal — she wasn't sent away or fired from her job in a way that could bring back the character later on. So while there's no hope of Liz returning in present day, there could always be a flashback or two to give fans some glimpses of the fallen character.

De Rossi also told Entertainment Weekly that she knew that killing off her character would be the best thing for the show, in that it would be a totally unexpected and shocking scene for viewers and she's not wrong. Watching Ms. Ruland/Samantha take a golf club to Liz's skull was brutal and shocking, even if Liz hasn't been super present this season.

At least in killing Liz on Scandal, it wasn't a gratuitous death. Peus and Ms. Ruland were in Mellie's office to get their point across to her about working for them and in killing Liz, they definitely got her attention. But even though Liz wasn't necessarily a fan favorite, she's certainly going to be missed moving forward.