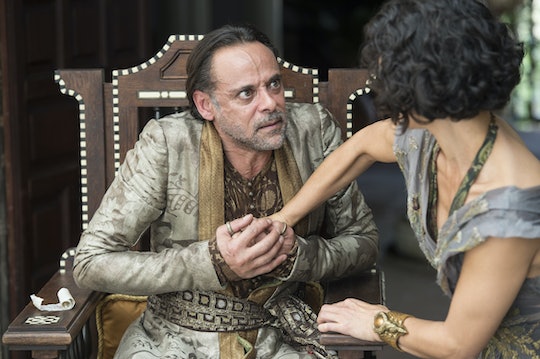 Will Ellaria Sand Be The Ruler Of Dorne On 'Game Of Thrones'? The Ladies Have Taken Over

Hell hath no fury like a Dorne woman scorned and that became clear when Ellaria killed Prince Doran on the Season 6 premiere of Game of Thrones. We all knew why Ellaria was mad at the Lannisters. Back in Season 4, her lover, Oberyn Martell, was killed during a trial by combat, when he acted as the surrogate for Tyrion. Oberyn's death was one of the most gruesome deaths on the show to date, with the Mountain literally crushing Oberyn's skull with his bare hands. She held Doran partly responsible, which answers why she killed him. But now that Doran is dead, will Ellaria be the new ruler of Dorne?

It seemed Ellaria finally got her revenge on the Lannisters at the end of Season 5 when she poisoned Cersei and Jamie's daughter, Myrcella, with a kiss. However, it wasn't just the Lannisters Ellaria and her daughters had an issue with. Back in Season 5, Ellaria made it clear to Prince Doran that she felt the Lannisters should pay for the death of Oberyn and was angry that Doran did nothing. Doran argued that Oberyn died during a trial by combat and therefore it wasn't actually murder. He also warned Ellaria not to harm Myrcella. Ellaria became even more angered with Doran when he arrested her and Oberyn's daughters, the Sand Snakes, for trying to take Mrycella, and then for making peace with Jamie instead of killing him when they had the chance.

Therefore when the message came about the death of Myrcella, Ellaria didn't hesitate to kill Doran. She already saw him as weak and she knew she'd be punished for what she did to Myrcella. The Sand Snakes then proceeded to kill anyone loyal to Doran, including his son, Prince Trystane.

Now the throne of Dorne is open and up for the taking. Technically, as far as the line of succession goes, Ellaria really has no claim to the throne. She was the paramour to Oberyn but not his wife. However, Ellaria seems to have taken Dorne by force. With Trystane and Oberyn dead and Elia Martell long dead (R.I.P.) there's really no one to challenge Ellaria's rule, and really who would? With her daughters fighting beside her, Ellaria has all the power, and now that she's in control of Dorne, there's no doubt she'll be heading to King's Landing next.

Now that Prince Doran is out of the way, Ellaria can finally get her revenge. It looks like the Martells and Lannisters may be going to war in this season of Game of Thrones.