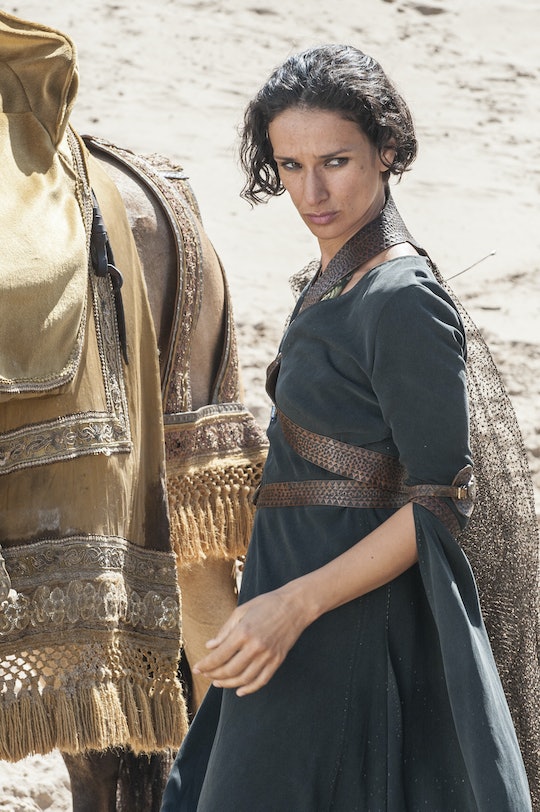 Will Ellaria Sand Kill Tyrion Lannister On 'Game Of Thrones'? She Wants Revenge

Things have been vicious in Dorne on Game of Thrones despite the airy gowns and arid climate that might otherwise make it seem like a fun vacation spot. The Dornish people have been hurting since the death of two of their own in King's Landing: Elia Martell, late wife of the late Rhaegar Targaryen, and Oberyn Martell, her brother. R.I.P. all around. Both deaths were incredibly violent, and could be traced directly back to the backstabbing Lannisters, setting off a feud between the two houses that could put the Montagues and Capulets to shame. Particularly aching for vengeance is Oberyn's lover Ellaria Sand and she's taking no prisoners when it comes to taking down Lannisters. Considering she's hitting the family with everything she's got, would she also go after Tyrion? Will Ellaria kill Tyrion on Game of Thrones?

First, a little backstory to establish just how much the Lannisters have messed up the Martell family. Elia's death was a result of the sack of King's Landing many years ago during Robert's Rebellion. Though the Lannisters had preached loyalty to the Targaryens, Tywin turned on the ruling house and had his army storm the city. Gregor "The Mountain" Clegane is a terrifyingly huge and powerful knight who, in a sense, works for Tywin and the Lannisters; he was the one to find Elia and kill her children, then rape and kill her as well. This set her brother Oberyn off on a quest for revenge, which he tried to get years later in combat against The Mountain. But how exactly does Tyrion tie in?

Tyrion is the reason Oberyn got involved in the fight at all, though let's not lay it all on Tyrion's shoulders – Oberyn was pretty thirsty for blood. Tyrion was on trial for the murder of his nephew Joffrey with Oberyn acting as a judge, but when Tyrion requested a trial by combat, Oberyn stepped up to be his champion. He knew The Mountain would be fighting for the Crown, so he seized his chance to take down his sister's killer. It's not technically Tyrion's fault (Oberyn volunteered, after all) but he's connected enough for it to be damning. And he is a Lannister; Myrcella had nothing to do with anything, and Ellaria still poisoned her.

The only problem would be getting the two together for the act to occur. Ellaria is still in Dorne, likely figuring out her next step after having King Doran and his son killed. Tyrion is all the way across the Narrow Sea in Mereen, dealing with the fallout of Dany's disappearance. However, even if Ellaria couldn't perform the act herself, distance wouldn't prevent her from hiring an assassin or maybe sending one of her daughters to do the deed. Still, hurting Tyrion likely wouldn't be good enough revenge on the Lannisters because of their less than familial treatment of him throughout the years. In fact, taking Tyrion out might actually be doing the Lannisters a favor. According to showrunner, Dan Weiss, Cersei blames Tyrion for Myrcella's death, so killing him wouldn't really bother her.

It doesn't seem likely that Ellaria would kill Tyrion when she's got much bigger fish to fry and much more painful targets to hit. Still, I wouldn't be feeling very safe right now if my last name was Lannister.