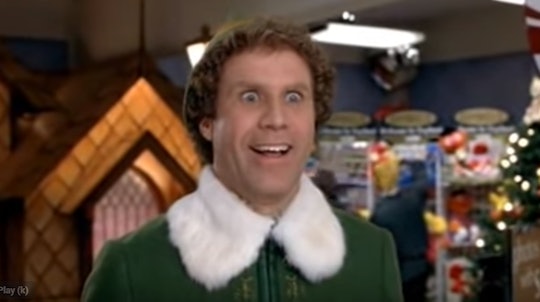 Every year I watch Elf. I'm one of those super basic moms who gets far too invested in Christmas, I know this, but I can't help it. I have a ritual for watching Christmas movies that brings me more joy than I can handle, if I'm being honest. Every movie is different; for instance, Hallmark Christmas movies call for wine and gentle sarcasm. Whereas a sweet movie like Elf calls for sincerity, pajamas, and cocoa. Because you can't watch that movie with a sneer, trust me. Not even if you're the star. In fact, Will Ferrell still cries over this Elf scene, and I'm going to guarantee at least half the population is right there with him.

Brace yourself for your shock of the day; Elf came out a full 15 years ago. I know, it seems impossible to believe and yet it's true. The classic tale of Buddy the Elf, a "human who was raised by elves," as he explains in the movie, travels from the North Pole to New York City to connect with his father (played with hilarious cynicism by James Caan). Jon Favreau directed the hugely successful film written by David Berenbaum, which also starred Zooey Deschanel, Mary Steenbergen, and Ed Asner as possibly one of the crankiest Santas you will ever see.

And even after 15 years, that movie still resonates with humans who were just raised by humans.

On Tuesday, Will Ferrell and Jon Favreau sat down with Rotten Tomatoes to share some behind-the-scenes commentary about all of the best moments they each remember from making the movie, as PopSugar reported.

For instance, Favreau noted that most of the people used in the film on the streets of New York were just regular people ignoring Ferrell dressed in yellow tights and a green elf jacket, which makes it extra hilarious.

But here's the thing about Elf; it's not just funny. It's sweet and sincere and well-intentioned in a way where you feel yourself getting all gooey and emotional despite yourself. Not even a seasoned actor like the one and only Will Ferrell was immune. In fact, he told Rotten Tomatoes that one particular scene can still get him weepy, all these years later.

"When Buddy is in the back of the sleigh, and everyone is singing in Central Park, and there's enough Christmas spirit to get it lifted off, I'm like 'Oh, I can't let everyone see me cry here at my own movie,'" the actor told Rotten Tomatoes.

He went on to note that the scene made him realize the full potential of the movie. "I was like 'Oh gosh, this is working on a level that I didn't anticipate.' And I knew this had the potential to be one of those special movies," he told the site.

That's the thing about fully engaging with a movie like Elf; it's so much better if you drop the cynicism and that internal eye roll we all walk around with on a daily level and just embrace all of it. The silliness, the kindness... and OK, yes the Christmas spirit.