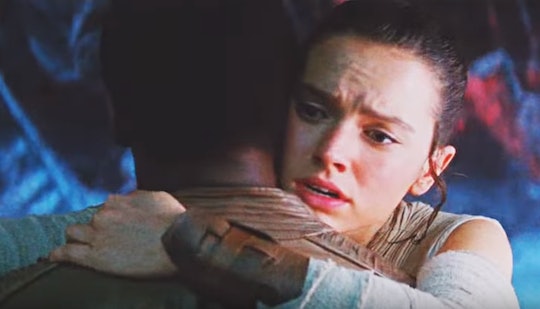 Will Finn & Rey Get Together In 'Star Wars: The Last Jedi'?

First there was Luke and Leia. I'm talking before we knew they were twins separated at birth and if you're honest, you'll admit you were kind of rooting for a romance between the farm boy and the princess. Then there was Leia and Han Solo, a sexier romance everyone could really get behind, like this girl here. We moved on to the doomed Anakin and Padme, which was hard to watch. So what's next in the romance department for the Star Wars franchise? Who will be the next "it" couple? Will Finn and Rey get together in Star Wars: The Last Jedi?

Let's back the old truck up here a minute, and take a little walk down Star Wars: The Force Awakens memory lane. Thirty years after the Republic was initially defeated by Luke Skywalker et al, Rey is scavenging on the planet of Jakku to survive. She meets Finn, a reformed storm trooper pretending to be a resistance fighter. They bond over their shared tragic pasts and their love of travel, most notably in the famed Millenium Falcon, and there's a whole lot of side eye going on.

So here is where we left off at the end of The Force Awakens; Finn has been left to deal with some serious injuries, a by-product of his fight with the grandson of Darth Vader, Kylo Ren. Rey has left to find Luke Skywalker and, if the trailer to Star Wars: The Last Jedi tells us anything, hopefully get in a little Jedi training now that she's figured out she has some pretty kick ass powers like telekinesis and mind control. In other words, the two friends are literally planets away from each other, dealing with their own business.

In The Last Jedi trailer, Rey appears to be spending most of her time either with Luke Skywalker or going head to head against Kylo Ren. While Finn's storyline looks quite different; Finn and new character, whip smart ship engineer Rose, are searching for someone who can help them stop The First Order from tracking the resistance forces through hyper jumps. So things are looking a little too busy for romance these days.

Sure, Han Solo and Leia Organa were able to find love in the middle of a resistance uprising against the Empire. But they were pretty much together all the time, unlike Finn and Rey who don't seem to be together much at all in The Last Jedi. And let's get real here; things didn't exactly turn out peachy keen for Leia and Han, what with their son turning to the Dark Side and their eventual break-up.

Now don't lose hope, guys. After all, Star Wars is all about hope. I have a good feeling about Finn and Rey's chances in the future for a few reasons. For one, they understand each other. They each have a somewhat murky history (Rey's parentage is uncertain, and Finn was taken away as a baby to become a storm trooper). And I got the sense on several occasions they wouldn't have been opposed to a little kissing in their downtime.

Therein lies the rub; these crazy kids just need a little down time. And I don't think they're going to get it in Star Wars: The Last Jedi.

But who knows what the future holds?

More Like This
Disney Drops Strange World Trailer, A New Sci-Fi Movie About A Family Of Explorers
15 Awesome Movies For Families To Watch During Hispanic Heritage Month
Here's Where The 'Hocus Pocus' Characters Are 30 Years Later
10 Facts About 'The Nightmare Before Christmas' That May Surprise You