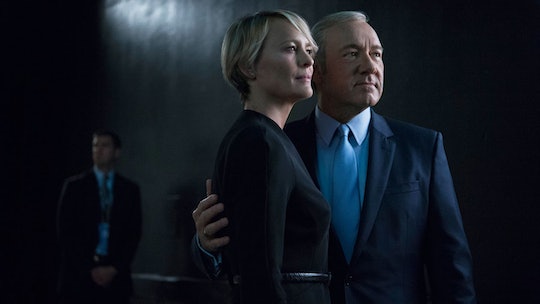 Warning: spoilers ahead for Season 5 of House of Cards! Oh, how life has changed for the Underwoods. Frank and Claire started Season 5 on such a high note for their marriage; utterly united — sharing a presidential campaign ticket for the first time in American history as husband and wife. President Frank Underwood and Vice President Claire Underwood. What a world that would be. Unfortunately, the love fest did not last. By the end of Season 5, fans were wondering if Frank will really kill Claire on House of Cards as he said he would at the end of the final episode. Or were his murder threats just a little light-hearted banter he was sharing with us?

I have to say, it didn't seem like a joke. After a long year of twists and turns, Frank ended Season 5 feeling like a man who had climbed to the top of a mountain and was ready to enjoy his view from the summit. He resigned as president in front of the Senate judiciary committee in the midst of their ongoing investigation into his potentially criminal misdeeds: Manipulating the election results in Tennessee, his history with President Walker, and let's not forget Secretary of State Catherine Durant was ready to testify on condition of immunity before he pushed her down the stairs. Oh, and did I mention there was a mole in the White House leaking confidential information to the press? Except Frank was the mole. A mole who was playing a long game, apparently.

Ever since Frank visited the Elysian Fields and met the men who run the world from behind the scenes, he decided to change tactics. He would be the "power behind the power" while Claire ran the country from the oval office. He manipulated everyone, including her. As he told Claire, he was doing it so he could "make her president." What difference did it make how she got there, so long as she did get there? It made a difference to her, it would seem.

All of Frank's planning hinged on one thing; Claire would have to publicly announce his full pardon. She was the only one who could do it. She agreed... and then she was like, just kidding, you're going to jail. No pardon for Frank.

This prompted him to state these very menacing words: "If she doesn't pardon me, I'm going to kill her."

Frank has a long history of dark thoughts about Claire; he daydreamed more than once about choking her to death after she left him in Season 4. In fact, the more powerful Claire became, the more violent the daydreams grew to be. Frank told Claire in Episode 13, "You're the most powerful woman in the world."

If Frank wanted to kill Claire merely because she didn't stay by his side... what will he do now that she's actively going against him? And if Frank wants to kill Claire, how would that even look? She is the president now, and Frank's power has diminished substantially. He might want to kill her, but that doesn't mean he'll succeed.