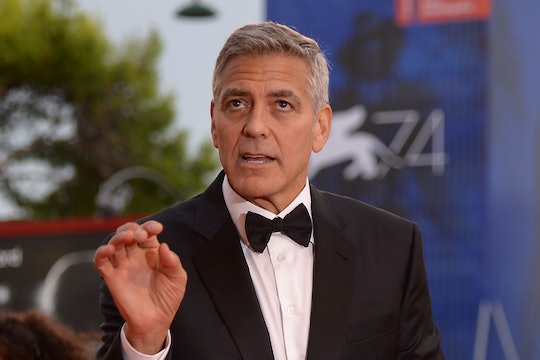 Will George Clooney Run For President?

Both Republicans and Democrats have floated the idea of making certain likable celebrities, so it's no small wonder that people can't stop asking George Clooney whether he'll run for president or not. Even before Clooney became an outspoken critic of Donald Trump, reporters just couldn't help themselves when it came to imagine Clooney in the Oval Office. So will George Clooney make a run for president? Probably not anytime soon.

At the Venice Film Festival this weekend, Clooney was asked about his political ambitions while promoting his new film, Suburbicon. Clooney laughed:

So he won't be making campaign hats just yet, but he would likely support anyone serious about running in 2020. And he's not a bad guy to get to support your campaign either. In 2012, Clooney held a fundraiser for President Obama that raised $15 million for the incumbent candidate. Not bad, at all.

But the new father of twins just isn't about that political life. He's consistently said that although he likes to engage in politics, he's not about being a politician, per se.

Clooney said when asked the same question back in 2015, according to People:

He was right then, and now that polarization might be even worse than ever before, given the recent violence at white supremacist gatherings such as the one in Charlottesville, Virginia earlier this month. Clooney's film, Suburbicon, is very timely actually, though the script was originally created by Joel and Ethan Coen back in the 1980s and only just recently picked up by Clooney, who co-wrote and directed the film.

It stars Julianne Moore and Matt Damon as a white couple in 1950s Levittown, Pennsylvania, juxtaposed against a black family played by Leith M. Burke and Karimah Westbrook. Burke and Westbrook portray William and Daisy Myers, who were an actual couple that moved into the new, middle class, post-war suburb in the '50s and suffered violence and threats from their white neighbors. The themes of the dark comedy are reflected in today's politics and current events. But Clooney swears it's not a Trump movie, according to The Daily Beast.

America is probably better off if Clooney sticks to film making and being generally adorable. Although Amal would make a killer first lady, right?