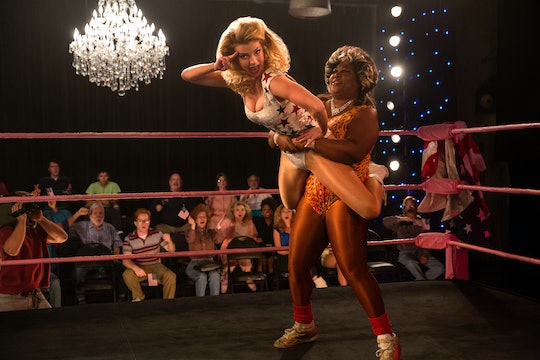 One of the most difficult things about Netflix shows is trying to predict their success in the long-term. Since the streaming platform is notoriously mum about viewership and ratings, it’s not as easy as researching how many millions of viewers tune in to each episode of each show or movie available. That being said, even though Glow’s second season hasn't yet premiered, fans are no doubt going to be asking, will Glow get a Season 3 on Netflix? It’s easily one of the more unique half-hour comedies available at the moment, and since it draws inspiration from real life events, it could easily last several more seasons.

In real life, the Gorgeous Ladies of Wrestling were a group of female wrestlers and actresses who performed matches and comedy sketches during the run of the original show from 1986-1992. So technically speaking, the run of Glow on Netflix could last several more seasons, especially if it is to keep up with the rise and eventual cancellation of the original program.

As it stands, the action of Season 2 picks up just a few weeks after the end of the first season. The show within Glow isn’t going to have a quick rise to popularity, instead showing how the women slowly gained notoriety, which leaves room for more years of the series. But as of right now, Netflix hasn't announced a Season 3 renewal or cancellation just yet.

When Netflix renewed Glow for Season 2, that renewal came a few months after Season 1 had premiered in June 2017, so there’s still plenty of time for a renewal announcement for Season 3. Given the growing popularity and the unique nature of the show, I don’t see why Netflix wouldn’t bring it back next summer yet again. Even one of Netflix’s arguably most popular and successful series, Orange is the New Black wasn't given a multi-season renewal until it hit its fourth season. So even if Glow has yet to be officially renewed for Season 3, there’s still plenty of time for that renewal to come, especially since it’s still a relatively new show.

But newer show or not, Glow is so unique and fun, while also following strong and empowering women and storylines, that I can't imagine Netflix would give up on it after granting fans a second season a year after a successful Season 1. Since Netflix doesn't typically release viewership or ratings information on individual shows, one of the estimates for viewership and fandom of Glow could be the 95 percent fresh rating on Rotten Tomatoes or the average user rating of 4.2 out of 5. It also has an 8 out 10 possible points on IMDB.com, based on the submitted rating of more than 20,000 users. Basically what I'm saying is that clearly Glow has seen some popularity thus far. So granting the show a third season would be smart on Netflix’s part.

Depending on how Season 2 does and how fans feel after they’ve watched it in its entirety, Glow could be looking at a renewal sooner rather than later. It really all depends on the success of the show's sophomore season (which with many shows can go either way). But as any Glow fan will tell you right now, there should probably be several more seasons locked in since each character is more intriguing and fun to watch than the last, and the same goes for the episodes. Until an official renewal comes, all we can do is marathon all of season 2 and maybe go through the first season again. You know, just for good measure.