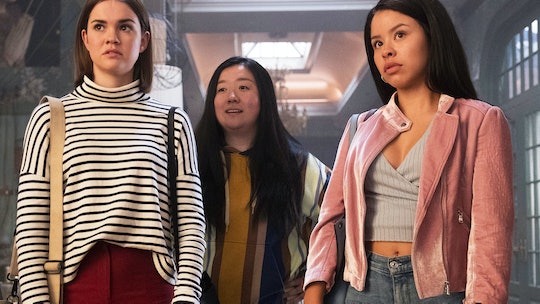 Will Callie & Mariana Be Back For More In 'Good Trouble' Season 2?

Freeform doesn't shy away from heavy topics. It embraces them. In early 2019, the Disney-owned network premiered Good Trouble, the highly anticipated spin-off of The Fosters that follows Callie and Mariana's new journey in Los Angeles. Now that the first season finale is about to air on Freeform, fans of the powerful series are wondering if Good Trouble will be renewed for Season 2. Fortunately, it looks like Good Trouble isn't in any danger of cancellation anytime soon.

Although the spin-off series premiered in Jan. 2019 and fans are still reeling from a major cliffhanger prior to the Season 1 finale, The Hollywood Reporter announced that Freeform renewed Good Trouble for a second season back in Feb. at the Television Critics Association's winter press tour.

Cierra Ramirez, who plays Mariana, then took the news to social media, sharing a video with her on-screen sister as they celebrated. The actress wrote, "Actual footage of @maiamitchell & I finding out @goodtrouble got picked up for a SEASON 2!!!! Ahhh we love y’all & cant wait to continue to tell the stories we love to ya! Best news ever 😭❤️"

And now, Good Trouble fans have one more thing to celebrate. As reported by TVLine, viewers won't have to wait long before the Good Trouble Season 2 premiere airs. At the Second Annual Freeform Summit, the network announced that the second season will be released on Tuesday, Jun. 18 at 8 p.m. ET.

So where does Good Trouble head from here? While fans are still plenty scared for Dennis in the season finale, Entertainment Weekly reported that the Freeform's second season will continue to follow Mariana and Callie as they try to find their place in their respective worlds in L.A. Mariana will be trying to break through the very male-dominated tech world and Callie will be dealing with the "harsh realities" of the federal legal system.

When the news broke that Good Trouble was getting a second season, Access sat down with Maia Mitchell, who plays Callie, and Ramirez to discuss what's on the horizon for their series. But, unfortunately for fans anticipating details on Season 2, the two actresses remained mum.

"We just got the news. We don't know a thing... that we can disclose," Mitchell teased.

Nonetheless, the actresses shared that there will still be lessons to be learned in Season 2.

"You're constantly evolving in your 20s," Mitchell said. "I'm a different person than I was a couple of years ago in a lot of ways, so you'll definitely see them grow and learn from their mistakes. And then make some more heavier mistakes for sure."

"But all in the name of good trouble," Ramirez added.

During their interview with Access, Ramirez and Mitchell both touched on the fans' reception of the show, considering its early Season 2 renewal.

"I think we felt a lot of the pressure to continue the legacy," Ramirez revealed. "So hearing that the fans are taking onto it really well makes it all worth it."

Now, the actresses are hoping to move forward with Callie and Mariana's stories by continuing to push boundaries and relating their show to events in the real world.

"I think that the beauty of the show is that it's so topical and so relevant," Ramirez said. "The world around us is so inspiring it's hard not to keep up."

The early renewal of Good Trouble and fan praise for the Fosters spin-off series could mean one thing. Heavy topics that are relatable to a diverse audience has a place on network television. So yeah, I'd say other networks should take notes.