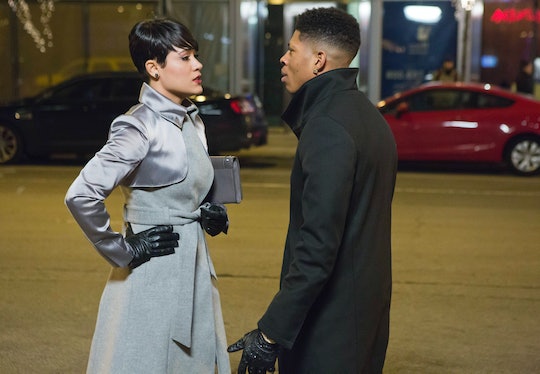 Will Hakeem & Anika Get Back Together On 'Empire'? She's Determined To Get What She Wants

Empire still hasn't quite resolved its midseason finale cliffhanger, insofar as we haven't seen much of Anika since she presumably shoved a pregnant Rhonda down a flight of stairs. Rhonda survived the fall, but lost the baby, and the subsequent trauma has been weighing on her marriage to Andre. But now that Anika is pregnant with the next heir to the Empire (Hakeem's son), it begs the question: will Hakeem and Anika get back together on Empire?

In the Season 2 episode "The Tameness of a Wolf," Hakeem proposes to Laura after a tumultuous Lyon family dinner. But will that even last? He's been known to fall really hard before, and all of his previous relationships have fizzled out, including his relationship with Anika. And Anika has already proven that she's willing to go to great lengths to escape her banishment from the Empire. Sabotaging Rhonda's pregnancy was only one half of her plan; we also see her dressed in disguise, posing as Laura's chauffeur. It's unclear what the plot with Laura may be, but whatever it is, we've established that Anika now knows where Laura lives, and has the access to kidnap her, or worse. It doesn't seem out of the realm of possibility, especially with the recent string of Empire deaths, that Anika is plotting Laura's murder to get Hakeem back. One of his lady loves already bit the dust this season at the hands of Lucious.

It does seem like Anika is hellbent on systematically destroying every obstacle in the way of her being welcomed back into the fold. And while committing murder is going to awfully great lengths for a guy she's not even all that into, our glimpses of Anika away from the Empire are sad, lonely, isolated, and Ben & Jerry's-binging in nature. Add to that the fact that she's pregnant, and the desperation behind her drastic behavior becomes clearer.

Empire showrunner Ilene Chaiken offered some insight into Anika's character in an interview with TVLine ahead of the midseason return. Said Chaiken:

"She was pushed and pulled in so many directions by the Lyon family, she was hurt, she was mistreated. And after behaving generously toward them and believing in various relationships, it’s enough to make anyone a little crazy. And our hope for Anika is that she’ll be able to come back from this. We’ll explore that with her and see her struggling to come back from that. Hopefully, the audience will be there with us and believe in the journey she’s been on, and the one on which she’s about to go forward. I’m certainly aware some fans of the show have been upset by this turn, while others have relished it. My observation — without making any kind of gender-bias assumptions — but anecdotally, men have loved the crazy and women have been offended by it. And as a woman, I still related to Anika. She’s not a lost cause."

If we take this to mean that Anika's erratic behavior won't be her demise, then it's totally possible she could swing a reconciliation with Hakeem.