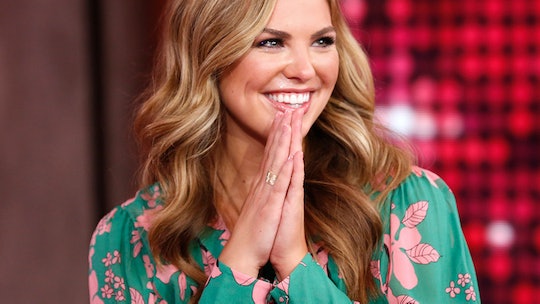 ABC Might Unleash The Beast Of Hannah B. On 'DWTS' & Roll Tide, I'm So Ready

The cast for Dancing With the Stars Season 28 has yet to be announced, but fans are ready to see The Bachelorette's Hannah Brown take on a new stage — without the roses or the heartbreak. On Aug. 17, the ABC reality series tweeted out a faceless black-and-white cast photo with the caption, "We’d LOVE to tell you who this is… But we’re going to make you wait a few more days." And everyone seems to think the network recruited the former pageant queen. So will Hannah B. be on DWTS? Bachelor Nation is waiting for the dancing competition to unleash the beast.

Following the cryptic tweet, fans flocked to the DWTS Twitter page and sniffed out a few similarities between the woman in the photo and Hannah. A few viewers noted Hannah's hand freckles matched the ones in the picture. Meanwhile, others pointed out the network's emphasis on "LOVE," which could allude to Hannah's reign on The Bachelorette.

Nevertheless, Hannah's casting on DWTS has been reportedly confirmed by Us Weekly. However, ABC hasn't revealed the Bachelorette alum's status on the reality series, and viewers will have to wait for the official statement to be released. But fans won't have to hold out for much longer, as Good Morning America is set to broadcast the new cast lineup for DWTS on Wednesday, Aug. 21. So hold onto your hats, Bachelor Nation. You'll be hearing from the former Miss Alabama soon.

Hannah won't be the first Bachelor Nation alum take part in DWTS if she is cast in Season 28. Viewers might remember Nick Viall, Melissa Rycroft, and more recently, Jordan Kimball, from previous seasons of the dancing reality competition. But Hannah's involvement in the new season is definitely a surprise, considering her struggles with the past year, as revealed in a lengthy Instagram post on Aug. 13.

"Honest policy: I’m struggling. Life is so different," Hannah wrote. "Since last August, I’ve been a pageant queen, a Bachelor contestant, and the Bachelorette. I’ve been in love with multiple people, I got engaged, I broke off an engagement, and I shared it all with millions of people. My faith has been questioned by thousands who don’t know my heart, and my transparency with my decisions has labeled me promiscuous."

Hannah then touched on her impact, as she became a role model for younger women and started a dialogue between faith and sex. She has also been offered a number of eye-opening opportunities and is trying to figure her life out on her own. But even so, Hannah is human. She admits she misses her friends and family, and she is having a difficult time keeping up with her own life.

"I am not complaining about this past year of adventures," Hannah explained. "The woman who has emerged would shock the mirror-image young girl from a year ago. I have so many blessings to be thankful for. However it’s uncharted territory for me, and it’s been hard to really process what the heck is going on."

That being said, the Bachelorette's candid post reminded fans why they fell in love with Hannah in the first place — she's real. And although she might be struggling now, she's going to continue her journey with her head held high. But will that journey lead her to DWTS? Only time will tell.