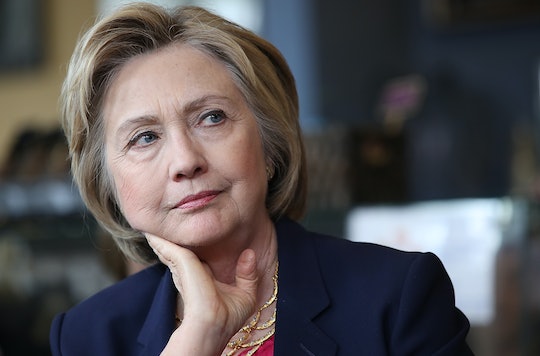 Will Hillary Clinton Choose A Woman Vice President? It's Possible, But Not Guaranteed

No matter what the outcome, a Hillary Clinton nomination for the presidential race would (and more than likely will) be a historic event. The former Secretary of State has a undeniable delegate lead over her opponent, Vermont Sen. Bernie Sanders, and if her campaign follows the same trajectory it has been until the Democratic National Convention July 25, Clinton will become the first woman to win the presidential nomination on a major party ticket ever. That means the running mate speculation game is on, and her fans and detractors alike are wondering whether Hillary Clinton will choose a woman vice president.

Shortly after Clinton won the New York primary last month — a victory that signaled to many that she had all but clinched the nomination — her campaign chairman, John Podesta, told The Boston Globe that Clinton will certainly consider women veeps, creating the potential for an unprecedented all-female ticket. This announcement prompted discussions that Massachusetts Sen. Elizabeth Warren, a Democrat who has still not endorsed Clinton, may be the woman for the job.

However, Warren and Clinton reportedly aren't especially friendly with each other, and that Massachusetts' Republican governor would appoint Warren's replacement if she were to leave her position, which would be no good for a President Clinton.

Perhaps most important, though, is that picking another woman as her VP could be a major political gamble for Clinton, who is notoriously risk-adverse, The Washington Post's Paul Waldman points out:

But there could well be some number of voters — how many is difficult to tell — who would vote for Clinton with a male running mate, but would find Clinton with a female running mate just too much to handle. It’s sexist, but Clinton is going to need the votes of people who have some sexism somewhere in their hearts, just like Barack Obama needed the votes of people with some racism somewhere in their hearts.

The Clinton camp has not shared any specifics about potential picks, nor has it indicated that Clinton would favor female candidates over male ones. Newsweek reported that Virginia Sen. Tim Kaine and secretary of Housing and Urban Development Julián Castro would both be much stronger choices.

Kaine has foreign policy experience and also speaks Spanish, but "old white guys just don't excite voters like they used to," Taylor Wofford notes. Castro, though, is Latino, so he belongs to a voting bloc Clinton undoubtedly wants to win over, but at 41, he's also pretty inexperienced.

When Clinton's people first broached the topic of a potential all-female ticket, the Globe brainstormed some other possibilities, if Warren weren't the way to go: Cecile Richards, the president of Planned Parenthood Action Fund, or New York Sen. Kirsten Gillibrand, although a "constitutional muddle" could pose challenges when it comes to having two people from the same state on the ticket. The Atlantic identified senators Claire McCaskill and Jean Shaheen, as well as Gov. Gina Raimondo of Rhode Island, as other possible contenders.

A relatively strong choice of female VP could be Minnesota Sen. Amy Klochubar, according to Newsweek, because she "doesn't have any known baggage to speak of." She has no foreign policy experience, however.

A recent CNN poll revealed that 80 percent of Americans believe that the country is ready for a female president, although it's less clear how voters would react to two women on the same ticket in November. While there are some solid female contenders that Clinton's aides are surely vetting, the same can be said for a number of well-qualified men as well. Clinton is, first and foremost, a savvy politician, and it's safe to say that she will choose the person she believes will best help her secure the presidency, man or woman.