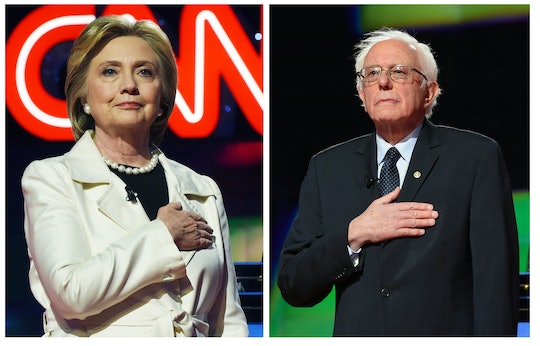 Will Hillary Clinton Choose Bernie Sanders As Her Vice President? Some Democrats Hope So

Rarely in recent memory has there been a presidential election as polarizing as the one we are living through today. While New York businessman Donald Trump has miraculously cleared the floor of any challengers in the GOP, effectively becoming the presumptive Republican presidential nominee, former Secretary of State Hillary Clinton continues her brutal battle for delegates against Vermont Sen. Bernie Sanders with her eye on the prize: to become the first female President of the United States in history. Many political pundits are projecting a fairly clear path to victory for her and are wondering if Clinton will pick Sanders as her vice president?

Some polls have Sanders as the early favorite for Clinton's running mate. A Rasmussen Reports national telephone survey of Democratic voters found that 36 percent would prefer Clinton to choose Sanders as her vice presidential candidate. Sanders' popularity with young voters certainly made a difference, with 40 percent of voters under 40 choosing him as the best option for Clinton's vice president. A Clinton-Sanders ticket could be a unifying arrangement for the Democratic Party in the 2016 election. Clinton has reportedly been on the lookout for a running mate who is a fighter... and, say what you will about Sanders, no one could ever accuse him of not being one heck of a fighter.

Despite being behind in the delegate count, the senator from Vermont shows absolutely no signs of backing down before the Democratic Convention in July. As Sanders has said, "We are in it until the last ballot has been cast." He is still counting strong numbers in individual primaries and continues to gain momentum based on his anti-establishment platform, not to mention his sheer tenacity. He has a reputation of honesty, integrity, and a refusal to play politics with big corporations who, he has said time and time again, are destroying the country.

But how does Clinton feel about potentially aligning herself with Sanders? In a Face The Nation interview on Sunday, Clinton may have dropped a sizable hint about the sort of future she sees with Sanders.

I see a great role and opportunity for him and his supporters to be part of that unified party, to move into not just November to win the election against Donald Trump, but to then govern based on the progressive goals that he and I share.

She went on to say, “We both want to raise the minimum wage. We both understand you have got to rein in bad actors on Wall Street and in corporate America to make sure they don’t wreck Main Street. We have a lot of the same goals. And I hope we can unify around them.”

As for Sanders, when asked by CNN's Wolf Blitzer if he would consider becoming Clinton's running mate, he said he would discuss it with her after the convention. As he said, "We are focused on the next five weeks of winning the Democratic nomination. If that doesn't happen, we are going to fight as hard as we can on the floor of the Democratic convention."

Sanders isn't willing to throw in the towel. He's a fighter, a visionary, and he could be just what the Clinton campaign needs.